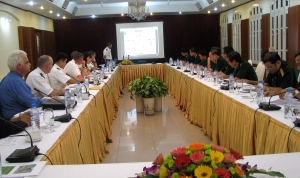 Discussions revolved around planning partner-training events between U.S. Army, Pacific and the Vietnamese People’s Army in the hopes of building the host nation’s capacity to perform as a regional leader in humanitarian assistance and disaster relief.   The first day’s agenda included alternate briefings by the U.S. and Vietnamese delegations describing each army’s organization, training doctrine, and areas of mutual opportunities.

USARPAC and the U.S. embassy in Hanoi invited USACC because of its Cadet English Language Training Team Program.   This pilot program between USACC and Unit 871 VPA has been a highly successful training event and was recognized as a very important strategic offering that the U.S. Army could provide the Vietnamese.

The reason, as it was explained, is because Vietnamese junior officers need improved conversational English to successfully perform as members of United Nation led disaster assistance teams in the region. Further, the Vietnamese recognize the importance of English as the language of business in the Asian rim.

The nine week long Cadet English Language Training Team program, which is part of CULP, provides a USACC cadre leader, English as a Second Language professors from North Georgia College and State University, and up to 10 USACC Cadets to act as teaching assistants.

The purpose of the CELTT training is to provide opportunities to practice conversational English as an adjunct to the formal classroom training already provided by the host nation military English language programs.  In this way, Vietnamese soldiers will better understand and speak conversational English because they will learn it from native English speakers.

The second day’s agenda included a visit by the U.S. Army delegation to the VPA 3rd Infantry Division/Motor Rifle Regiment I.   The unit provided a firepower demonstration of their soldiers with AK-47 and PKS machine guns as well as a tour of their dining facilities, barracks, and the farm in which they grow over half of their own food and meat.

The final day of the event was a trip to Halong Bay, a burgeoning new tourist and vacation area in northern Vietnam which caters to the Southeast Asia and Australian markets.  The hosts included this tour to show the U.S. delegation the rising economy and opportunities for investment in their country. 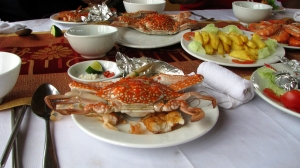 Warriors Corner: JROTC – The Strategic Proposition to our Army and our Nation