The sky darkened and rain poured on June 8, delaying the start of the Team Development Course (TDC) for 1st Regiment of Cadet Leadership Course, Alpha and Bravo companies. The question remained whether training would continue.

Suddenly the rain stopped and cadets rushed to their lanes to begin the course. The objective of TDC: travel from point A to point B with the minimal equipment as a team.

Team. It is a four-letter word that explains the Army as a whole. And with that comes trust. The cadets needed to trust that they could complete a task as a team.

One task required the team to successfully pull piece of equipment across and obstacle.

Cadet Evan Lim crawled across a plank to transport another piece of wood on a column. The weight of the wood caused it to slowly fall to the ground from Lim’s hand. The team gasped as it descended. But Lim and a few cadets managed to pull it up before hitting the dirt.

“I was thinking ‘Oh shoot, let’s put this bad boy back up.’ It was a bit of a scare,” said the Northern Arizona University student. “[This course] was motivating.” This was one of the lanes cadets had to accomplish.

“That’s what we’re out here to do,” said Karlin, the Officer in Charge of TDC. “These cadets have been doing everything at an individual level up to this point. The obstacles are challenging but we try to stress a team dynamic.”

Cheers erupted when a cadet managed to pull across a zip line with the mannequin representing a soldier.

“[I’ve learned] how to work with your peers under situations that cause pressure,” said Cadet Jordan Valori of the University of Scranton, Pennsylvania. “Also how to be patient, how to be a leader, and a good follower.”

At one particular lane, a cadet held a long wood plank over his shoulders. The team looked on and coached him as he slowly brought it down to the column. The board made it and the team yelled with excitement.

Suddenly, the board fell off and the team groaned.

“Have to start over,” said a cadre. Together, the team picked up the equipment and went back to the starting point.

“It’s not all about strength,” Karlin said. “It’s identifying those leverage points, figuring out how they can use their assets. The main thing is communication.”

As lightning approached, training was put on hold. But when it ended, cadets picked up where they left off as if trust, confidence and teamwork never left their bodies. They proved that anything was possible in poor conditions. 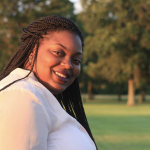