Company Bravo cadets work to get their squad over a wall as part of the Team Development Course Thursday.
U.S. Army photo by Cara Nordin

The first regiment of CIET cadets showed remarkable energy, optimism and resilience as they took part in the Team Development Course this week.

The Team Development Course is an eight-obstacle training course (doubled up to accommodate 16 squads) which serves to breed teamwork and cultivate comradery all the while testing creativity and critical thinking.

Cadets must accomplish tasks such as getting their entire squad as well as a 50lb. box of “ammunition” over a wall several feet above their heads, using a rope with grappling hooks to move a jug of water without allowing any of the water to spill and crossing a “river” with an oil drum by using three posts coming out of the ground and boards of varying lengths.

Company Bravo cadets attempt to get one of their boards to the final post. U.S. Army photo by Cara Nordin

Alpha Company of this regiment was the first company this summer to conquer that obstacle in particular, said Maj. Adam Karlin, the OIC of the course.

“It looks so simple but it’s not,” Karlin said. “As a squad leader you have to step back and anticipate those sticking points. You’ve gotta find a way that’s smarter.”

Before the cadets of the second CIET company (Bravo) headed out to face their missions Thursday, Karlin spoke to them about the importance of team building.

“Steve Jobs, the founder of Apple, came up with all these great inventions- iPhone, iPad, iMac, iTunes- all this stuff that changed the world dramatically- but when they asked him what his greatest accomplishment was, it wasn’t any one of those inventions; it was developing the teams that made those inventions,” Karlin said. “You know he was a college dropout. He didn’t have a degree. He was a guy that was extremely good at building a team.”

The cadets not only had Steve Jobs as an example of a great supporter of all things team, but they were also able to look to the men and women conducting their training.

“[All of these cadre] are really, really good,” Karlin said. “The only reason we’re so successful out here is because of that team that we’ve got. So I’m pretty lucky to have them.”

One non-commissioned officer in particular stood out even to Command Sgt. Maj. Osborne. During the cadre’s preparation for the beginning of CST, the Osborne gave Sgt. 1st Class Lewis Taylor a coin as a symbol of his appreciation for Taylor’s work.

“I received it for motivation,” Taylor said. “Out of all the sites that he had been at I was the first one that actually motivated him to really want to get up and do the training.”

Fortunately for the cadets, Taylor brought that motivation with him to the Team Development Course.

“The overall objective of the Team Development Course is to get the cadets to start developing plans, start communicating more and building trust among their squads,” Taylor said. “In order to lead you must be a good follower, establish a good plan, good communication, trust and believe in your squad. As long as you do those things you will succeed at whatever mission comes up, whether it be military or civilian-wise.”

Company Bravo cadets use a rope with grappling hooks to move a jug of water into a designated area without letting it touch the ground.
U.S. Army photo by Cara Nordin

The cadets said these are the lessons they have been learning during the first week of CIET. “Communication is very important when you’re working in small tight spaces and it’s good to work together with your team, get inputs that they have and see what they think,” said Cadet Sivaatasi Mathias from the Virginia Military Institute.

“You’ve got to have the ability to listen to everybody’s ideas and sift through them,” said Cadet Sasha Neal.

The young men and women of “Bravo third platoon, fourth squad, best squad” (in their words) had several other lessons to share as well:

And positive they were. The cadets cheered and laughed despite the heat and challenging tasks set before them.

Cadet Reid Schmidler supports board as teammates use it to cross “river” during the Team Development Course Thursday. U.S. Army photo by Cara Nordin

“We’re having fun out here,” Karlin said. “You see corporations out there pay good money to come out and do stuff like this, so these cadets are getting a chance that not everybody gets.”

“I’m a pretty doubtful person so at first I doubted my squad members but you guys have proven me wrong every single time,” said Cadet Nina Skinner from Georgia Military College. 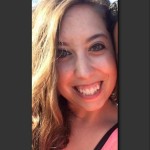