FORT KNOX, Ky.- Today, the first regiment of Advanced Camp Cadets arrived from all across the United States to begin summer training.

The first group of cadets arrived on base around one o’clock on June 4. 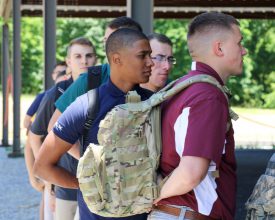 Cadets are lined up, ready to begin the registration process. Photo By: Inayah Bolton

Day one on base is a light day for the Cadets. They arrived by bus shuttle, headed to registration and integration, where they were checked for height and weight. They then had organizational clothing and individual equipment inspection. From there, the cadets were transported to their barracks to settle in and once that was completed they went to dinner and relaxed for the evening.

Anticipation is in the air and the Cadets are beyond ready to see what this summer has in store for them. “I’m really excited to start training, get in the field, and begin the hard work”, stated Cadet Johnathan Condly of the Red Diamond Battalion, Temple University. When asked, are there any worries that you have for the summer training, Condly responded with, “no, we have been trained really well at my school so I’m really confident that they prepared us well enough. Although, I am a little nervous but that’s because it’s always a new challenge around the corner.”

Cadet Neil Mendonca of Fourth Platoon BC, shared similar feelings upon arrival. “I have an open mind, despite not knowing what to expect.” 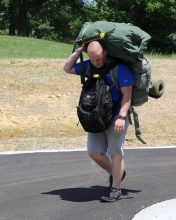 These Cadets are going to be in for a summer full of surprises. For 30 days they will be tested physically, mentally, and pushed to their highest possible level of excellence. Throughout the summer, they will execute everything they have been prepared for throughout their school year.

“In my 300 year [junior year] at school, we honed in on patrol-based operations, ambushes, raids, land navigation and much more”, stated Cadet Mendonca. “We have been equipped with all the necessary training to succeed, so I’m excited.”

Some Cadets will arise as strong influential leaders and others will learn to trust said leadership. Bonds will be formed and an unbreakable trust will be established throughout the battalions. There are high hopes that everyone will walk away from Advanced Camp stronger than when they arrived.

I’m Right Behind You, Battle Buddy