The afternoon was filled with the sounds of pacing boots and Drill Sergeants rhythmically chanting, “Left…left. Right. Left,” as the Cadets aimed to master the steps that will one day play a significant role in their young Army careers. 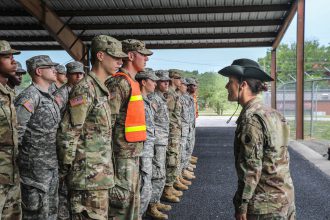 Cadets were organized and lined up in their respective groups, before being marched down the streets of the Disney Complex. The site of Drill and Ceremony exercises, otherwise known as “The Pit,” provides a wide open space for the Cadets to practice their formations and gain a solid grasp of the appropriate spacing and timing that comes with marching as a cohesive unit.

The growing pangs of the young Cadets were evident at the start of the exercise, as many reacted to the tight turns and specific footwork with looks of awe and confusion. Cadets often mistimed steps and looked to each other for help. However, after a few practice runs (and some outward encouragement from the Drill Sergeants) the Cadets of 1st Regiment Basic Camp began marching swift and executing crisp turns, as if they had been doing it all their lives.

Cadet Cory Beam of John Carroll University provided some insight on the exercise, stating, “It’s a lot of new stuff and a lot to take in, but they give us the time we need to learn it all.”

When asked what some of the most difficult parts of the exercise were, Cadet Beam acknowledged the lingo saying, “I had never even heard of left flanks and right flanks.”

Cadet Beam then went on to stress the importance Drill and Ceremony had as a component of Basic Camp and closed with, “This training will help make better Soldiers of the future.”

Drill and Ceremony embodies everything Basic Camp is about for these young Cadets. Starting off almost all of them are faced with challenge and confusion, many of them may even doubt their abilities and wonder why they are here. However, they never allow the turmoil to break them, they weather the storm and come out the other end polished from the pressure. Step by step, the Cadets march towards their bright futures.