FORT KNOX, KY – The Cadets from 1stRegiment Advanced Camp had high morale despite the extreme temperatures as they completed the alternate course qualification with their M4 carbines, on June 9th, at the Canby Hills Range. 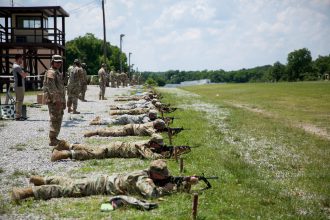 The ALT-C qualification is the Army’s 25-meter alternate course for rifle qualification. The Cadets are required to shoot at targets containing 10 silhouettes, scaled to represent distances ranging from 50 to 300 meters. They are timed on 3 strings of fire; one for each firing position: prone supported, prone unsupported, and kneeling.

Cadets began by firing 20 rounds in 120 seconds from the prone supported position, where they lay down on the ground and rest their rifle on a provided support such as a forked post or sandbag.

Next, they fired 10 rounds in 60 seconds in the prone unsupported position. Prone unsupported is where they lay down on the ground while holding the rifle up and stabilizing it on their own.

The last string requires Cadets to fire 10 rounds in 60 seconds from the kneeling position, taking one knee while supporting their rifle. The timing of the event adds an element of stress to the task, because for each string the Cadets are allotted an average of six seconds for each shot.

When asked about the significance of qualifying, Cadet Hena Jenkins from Alabama A&M stated, “It’s a basic soldiering task that we need to be proficient with, if we are going to ask our Soldiers to do the same.” Cadet Jenkins has already branched in the Adjutant General Corps and will commission at the end of camp.

“I really miss my baby boy Sammy and my husband Brent, but I’m trying to focus on the here and now,” Jenkins shared.

The Cadets follow the Cadre’s instructions of “Point! Post! Sprawl!” This series of instruction is a three step positioning process. 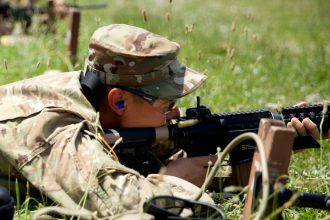 To begin, the Cadets first point their weapon downrange towards their assigned target, then begin to crouch down while posting their non-firing hand on the ground for stability. Finally, they kick their feet out behind them and lower themselves to the ground quickly, sprawling out to distribute their body evenly in the prone position. This ensures the Cadets reach their firing position safely and efficiently. The prone position can effectively help mitigate recoil for consistent accuracy.

While on the range, it reached Heat Category 5, the highest level that requires untucking trousers from boots and opening the cuffs of blouses ensuring airflow. Cadets had to drink at least a quart of water per hour, to maintain a healthy body temperature and adequate levels of hydration.

In this heat, another requirement is a work/rest rotation; because marksmanship activities are considered easy work by Army regulation, the regiment followed the guideline of 50 minutes of work, followed by a 10-minute break. 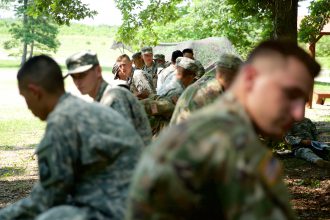 Cadets of Charlie Company, 1st Regiment, Advanced Camp relax in the shade after completing Alternate Course Qualification at Canby Hill range June 9 in Fort Knox. It was a heat category 5, over 90 degrees, in the Kentucky summer. By Joseph Barkoff.

“My favorite part of today is how we’ve had some downtime when we aren’t firing,” Cadet Austin Wagnon from Oklahoma State University explained. “So we’re getting to know each other better.”

For members of 1st Regiment Advanced Camp, ALT-C rifle qualifications was not only an opportunity to display their proficiency, but also a chance to bond with their peers.

Drop everything and read… maps