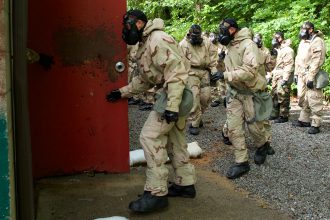 A CBRN strike is simulated by activating tear gas in a confined space, which provides a necessary incentive to train properly. The exercise requires Cadets to don Mission Oriented Protective Posture equipment, that is used to protect Soldiers in toxic environments. They then performed safety checks on their gas mask seals, outerwear, over boots, and gloves.

The Cadets file into the chamber after safety checks are completed then perform exercises to get their heartrate up and breathing elevated. They are then instructed to remove their gas masks and fully experience the tear gas. The irritant causes their eyes to become watery and noses run, creating a very uncomfortable sensation. Cadets then file out the chamber, blinking their eyes and flapping their arms, attempting to get their breath back and clear their sinuses.

Cadet Gia Cruz from Kennesaw State University stated, “We really gained a better understanding of what the Chemical Corps is all about. It was eye opening to see what they deal with.” 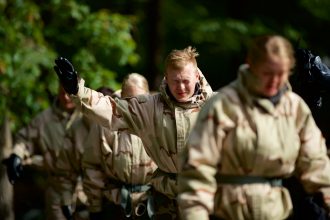 Cadets of Alpha Company, 1st Regiment, Advanced Camp flap their arms and blink their eyes to lessen the effects of the gas chamber at the Chemical, Biological, Radiological, Nuclear (CBRN) event June 12 in Fort Knox. By Joseph Barkoff.

This difficult experience instills confidence in their equipment and gives them a taste of the dangers of lacking/improperly wearing personal protective equipment. If these future leaders ever find themselves in a situation with real CBRN threats, they will use their understanding of proper wear and application of gear to stay alive.

“I think exiting the chamber was the best part. Everyone had that shared experience and moment of relief.” shared Cadet Pierre Gutierrez, from Saint Mary’s University in Texas.

Although the CBRN Chamber was the main event, valuable time in the training area was also used to gain a greater understanding of the Chemical Corps as well as learn from experienced officers about career development. 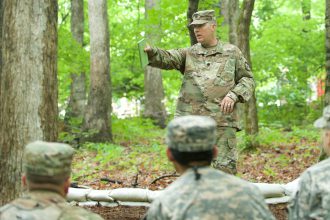 Cadets of Alpha Company, 1st Regiment learn about what the Army is all about from Lt. Col. Derek Carlson, from Morehead State University at the Chemical, Biological, Radiological, Nuclear (CBRN) event June 12 in Fort Knox. By Joseph Barkoff.

“Informed decision making is identifying facts from assumptions. Through that process they can identify their goals and start making steps to further their careers and ambitions,” said Lt. Col. Derek Carlson, the CBRN OIC, from Morehead State University. “These Cadets are at the perfect stage, where they are about to make their branch choices and finish school. That branch choice will have some impact on their career trajectory.”

Cadets were educated on operations involving CBRN threats, that are managed through the coordination between initial entry teams, sample teams, decontamination teams, and the tactical operation center.

They also received a briefing that illustrated what CBRN ground teams deal with regularly, as well as an example of a lab that teams had encountered in the past. 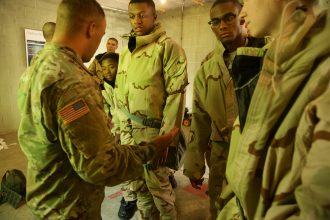 Cadets of Alpha Company, 1st Regiment learn about the chemical make up of the gas they will experience in the next room in the gas chamber at the Chemical, Biological, Radiological, Nuclear (CBRN) event June 12 in Fort Knox. By Joseph Barkoff.

“The Cadets are doing well and asking a lot of good questions,” added Staff Sgt. Juan José Torres, from Joint Base Lewis McChord, “They seemed to like the clandestine lab that we simulated for them.”

The CBRN event has laid the foundation for true safety and bright futures for the Cadets of 1st Regiment Advanced Camp. During the after-action review, Carlson concluded by addressing the Cadets, “What’s the secret to the Army?  It’s all about people. We take care of our battle buddies.”

“You do your best” – Cadets Take on the APFT