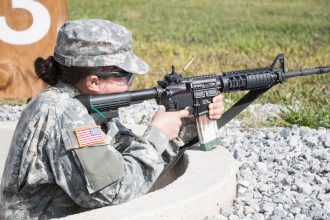 FORT KNOX, Ky. – Cadets from 2nd Regiment, Advanced Camp tried for an expert score in Basic Rifle Marksmanship, a necessary criterion for the Recondo Badge, on the pop-up course at the George Blair Qualification Range on June 15.

They had the opportunity to qualify with still targets on the Alternate Qualification Course the day before.

Spc. Rocky Alvarez, the shakedown Non-Commissioned Officer at the range, ensures that Cadets don’t leave the range with any live rounds on them. 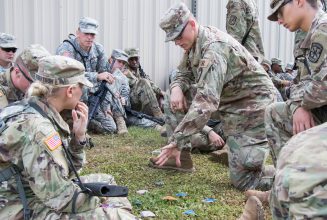 He described the range as primarily for Recondo, but said that Cadets go for normal qualification as well.

Cadet Johnathon Price, a student at Louisiana State University, said he was trying for an expert score, at least 36 out of 40, and had to mentally prepare for the pop-up course, noting that he’d only shot 29 out of 40 the day before.

“I relied on my squad,” stated Price. “I relied on my platoon [to] make sure that I was going in there calm-headed, level-headed, with a clean rifle, and ready to shoot.” 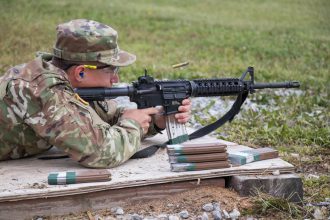 Price reported he shot 36 out of 40. His platoon was proud of him and he was proud of himself. “They’re individual Soldier skills,” explained Price, “but it’s honestly a group effort.”

“I learned to focus my front sight post better … and my positioning was changed … and it helped a lot,” asserted Lenderman. “I qualified expert yesterday.”

Cadet Raney Swanberg, Radford University, kneels in a fox hole and aims at her target at the weapons qualification on June 15 at Fort Knox, Ky. (Photo by Emily Peacock)

Cadet Rashad Thomas, a student at Troy University, mentioned he could’ve done a better job on the pop-up course, but was ultimately pleased with his performance qualifying.

Cadet Mark Wallerius, a student at Montana State University, similarly expressed that he didn’t do quite as well today on the pop-up course as he did yesterday when he shot 35 out of 40 with the still targets.

However, he remained positive and stated he’s happy to get the experience.

Lighting Up the Dark