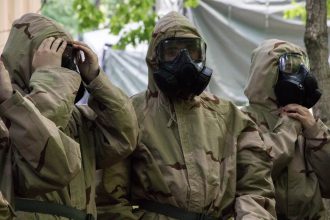 Initially, the Cadets suit up in gas masks and jump suits to protect them from the gas, but soon enough they are tested without them. Once in the chamber, they are asked to remove their mask individually and sing the Army song. This allows exposure to the gas and the side effects it causes.

Once singing is completed, they are told to readjust the masks so they are no longer exposed. After everyone in the chamber has completed that task, they are required to remove their mask once again. This time, instead of singing, the Cadets hold their mask in their left hand while simultaneously holding the shoulder of the Cadet to their left.

After everyone is in position, they then run in two complete circles around the room while shouting their platoon motto. Sluggish and short of breath, the Cadets exit the chamber where fresh air awaits them.

Why are Cadets sent into the Confidence Chamber where doses of CS gas are released? Well the answer to that is because the Cadets must learn to trust the equipment given to them.

Cadet Kerri Kirkland of North Greenville and Furman University completed the exercise and had a few words of encouragement for future Cadets. “No, the gas chamber isn’t the most exciting exercise, but they’re trying to get us to trust our equipment.”

“All in all, the experience only lasts about ten minutes. For those ten minutes, you are only in the chamber for five and the side effects last for about three minutes tops. Remember, you are in good hands even when you feel as though you aren’t,” Kirkland added.

The CS gas is not toxic enough to harm the Cadets. In fact, the gas only acts as a mild irritant to the body. 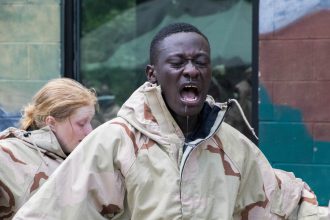 Lt. Col. Dereck Carlson gave a more descriptive answer on the subject matter. “That reaction is really limited to a tingling on the skin, almost like a burning sensation but it’s really not. It’s just the nerves there in the skin. There’s an itchiness or a loss of vision to the eyes. It’s very difficult to maintain focus with your eyes or a watery nature to the eyes.”

He continued, “There also may be difficulty breathing. It doesn’t affect an individual from breathing. They are able to breathe, but it is causing the mucus in the nose to run. It’s a general discomfort, but that’s generally about it.”

The Cadets of the 2nd Regiment, Advanced Camp are tackling these exercises with ease. Any new task that is thrown their way, only makes them stronger long term.

Rucking Toward the Music