FORT KNOX, Ky. – Between gasps for air, coughing, and the occasional snot rockets, Cadets from 2ndRegiment, Advanced Camp, put their confidence in themselves and theirequipment to the test during CBRN training on Tuesday, June 19. 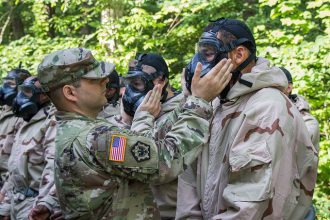 Sgt. Christopher Robison assesses the seal of a Cadet’s mask during CBRN training on June 19 at Fort Knox, Ky. (Photo by Emily Peacock)

“CBRN stands for chemical, biological, radiological and nuclear,” explained Sgt. Christopher Robison. Through participating in CBRN, Cadets are learning to trust their equipment and their abilities by figuring out how to successfully apply their gear and build the confidence necessary to face the CS Chamber.

“They’re training with the new M-50 masks, which is an upgrade from last year’s M-40 masks,” said Robison. “These new masks have two cartridges on them as opposed to one.” 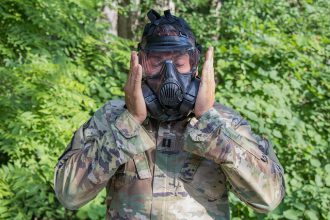 Capt. Anthony Richens assesses his own mask before entering the CS Chamber on June 19 at Fort Knox, Ky. (Photo by Emily Peacock)

In addition to their gas masks, Cadets will also be issued their Joint Service Lightweight Integrated Suit Technology (JSLIST) to protect them from the effects of CS gas. The protective liner of the JSLIST has the ability to make any chemical it comes in contact with inert, described Robinson.

What is the CS Chamber?

Decorated in dark camouflage paint, the CS Chamber sits like a large beacon on top of a small hill overlooking the different training nooks. Consisting of two rooms, the CS Chamber is used to facilitate what a potential CBRN attack would feel like.

CS gas, a nerve irritant that closely resembles the effects of tear gas, is used to simulate the attack. Dressed in their full JLIST and masks, however, Cadets won’t feel a thing – that is, until they break the seal. 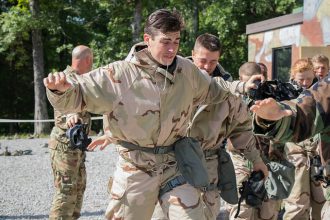 Coughing, sneezing and crying are just a few of the effects Cadets from 2nd Regiment, Advanced Camp, experienced at the CS Chamber on June 19 at Fort Knox, Ky. (Photo by Emily Peacock)

“Today is about getting Cadets confident in their equipment and show them they can succeed even when their environment is dangerous,” said Capt. Travis Swan, an observer/controller/trainer (OCT) for Charlie Company, 3rdplatoon.

“We are preparing them for future operations in a world that could possibly use CBRN type equipment against us.”

Although Cadets are only required to enter the chamber once, to the surprise of his Cadets, Swan walked through the CS Chamber an impressive three times. 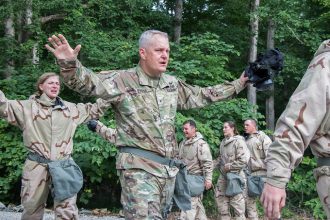 “The first time was to validate that I could do it,” said Capt. Swan. The second and third time, he explained, was for esprit de corps, a French term referring to the morale and loyalty shared between a common group. With hands placed on the shoulder of the person in front of them, Cadets from 2ndRegiment, Advanced Camp, as well as Swan and other Cadre members, took to the CS Chamber to test their equipment.

Once in the chamber, Cadets walked around, practiced cadence, and eventually broke their masks’ seal to experience the full effect of CS gas.

“It feels like a really spicy jalapeño all over your face,” joked Sgt. Robison.

As it turns out, having the support of their fellow peers and Cadre seemed to be almost as important to Cadets’ success as it was to have faith in their equipment. 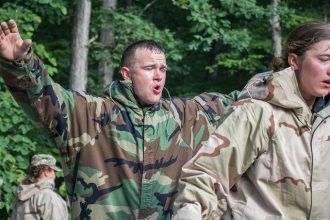 “It meant a lot to us,” said Cadet Michael Eckenrode, Penn State. “We saw Capt. Swan come out before us and we even saw General Evans come through.”

It was mind-blowing to see those guys go through it before us and it definitely helped to build a lot of confidence in ourselves, admitted Eckenrode.

With CBRN under his belt, Eckenrode seemed optimistic about the future of his platoon.

“The people really make it,” said Eckenrode. “The relationships I’ve built these past 10 days have been unreal and I’m excited for us to head to the field.”