Fort Knox, Kentucky – Cadets from 3rd Regiment, Advanced Camp learned how to make calls for fire with an electronic simulation on June 23rd. A call for fire is a request for a target to be destroyed by fire support elements such as artillery or mortars.

Sgt. Liam Barry from Washington, DC said, “In the event they find themselves in combat, these future leaders will be prepared to bring the support they need to the battlefield.” 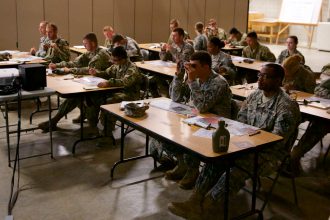 Cadets of Bravo Company, 3rd Regiment, Advanced Camp participate in a test on the ability to “call for fire” at the Virtual Training Center June 23 in Fort Knox. By Jospeh Barkoff.

The Cadet’s arrived to the training site and were taught how to use available resources to call in artillery strikes. For the simulation, the Cadets had to identify a target, use a map to find the targets grid coordinate as well as its relation to them, and if inaccurate adjust their fire to destroy the target.

Sgt. 1stClass Mathew Kruse from Campbell University told us, “The hardest part for the students is putting it all together with attention to detail.”

“My previous occupation as a Guardsman was 13F, a forward observer.” Said Cadet Orin Atha at Oklahoma State University. “Be calm, studious, and don’t overthink it and you will be fine.” 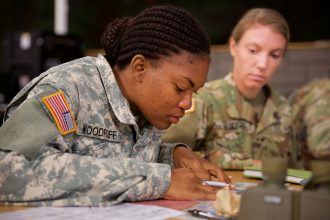 After the block of instruction, the Cadets took a written test to ensure they retained the class.