FORT KNOX, KY. — For most students going into their senior year of college, a typical summer before their final fall semester might include landing a stellar internship, working in a 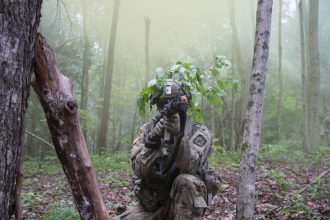 Out of their 31 days in Advanced Camp, Cadets will spend 14 of those days in the field.

research lab at their respective university, or even studying abroad in a foreign country. But for students enrolled in the Army Reserve Officers’ Training Corps (ROTC), the summer before their senior year is far from typical.

Between June 4 and August 18, approximately 6,000 Cadets, or students enrolled in ROTC, will flock to Fort Knox, Ky, to spend 31 days participating in Advanced Camp. Graduating from Advanced Camp will ultimately enable these young men and women to commission as 2nd Lts. in the United States Army come their college graduation.

However, to graduate from Advanced Camp, Cadets must survive their 14 days out in the Field Training Exercise Lanes.

With almost half of their time in Advanced Camp spent out in the FTX lanes, it’s no wonder that their two weeks in the field are crucial in preparing for life after commissioning. So what exactly is FTX?

“In the FTX portion of Advanced Camp we are trying to create an uncomfortable environment that pushes these Cadets both mentally and physically,” said Col. Richard Garey, Advanced Camp tactics Deputy.

Ultimately, the purpose of the FTX is to create a simulated battlefield environment which tests a Cadet’s ability to act and react under stressful conditions while also evaluating Cadets on how well they serve both as a leader and a follower, described Garey.

The field training aspect of Advanced Camp is broken up into three phases: the crawl, the walk and the run phases.

During the crawl phase, “Cadre members are working with Cadets to demonstrate what looks right,” stated Garey. “During this time period, Cadets are not being assessed, but rather they’re establishing a basic level of proficiency they’ll use throughout their time in the field.”

After Cadets have completed their four days in phase one, they then begin the walk phase of their time in the field, also referred to as FTX 1. 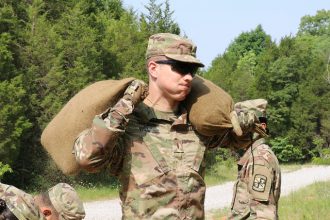 Col. Richard Garey estimates that over 4,000 sandbags were filled to construct the various objective sites found in the FTX lanes.

Throughout FTX 1, Cadets have now assumed their leadership positions but still work closely with Cadre to ensure that each objective is met and that every member of the platoon understands the importance of the decisions being carried out.

“During the walk phase, we keep the tasks very simple so there’s very little complexity,” assured Garey. “There’s a dedicated enemy element out there to maintain that stressful environment but there aren’t many other training enablers to complicate the situation.”

The final phase of FTX, the run phase, is a culmination of everything Cadets have learned, both at Cadet Summer Training and at their universities. Similar to the previous phases, the run phase (also referred to as FTX 2) is composed of a completely immersive environment, platoon-level operations, near-peer conventional threats and continuous operations. However, to complicate things obstacles such as host nation security forces and media on the battlefield have been added to the situation, increasing the amount of opposition on the battlefield.

“In this phase, Cadre are completely hands-off and Cadets are allowed more freedom of maneuver than in the previous two phases,” said Master Sgt. Jason Diaz, the NCOIC of FTX 2 tactics. 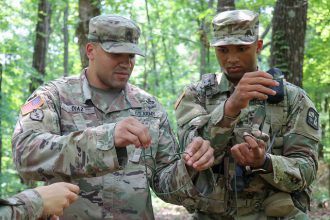 Master Sgt. Jason Diaz demonstrates for 2nd Lts. how to tie an effective knot when constructing objective sites used for the FTX.

“A typical day in the life of a Cadet in FTX 2 would start with finding the operation,” explained Diaz. “Once they complete the planning portion of the day, they’ll start their movement and continue to disseminate their plan to the lowest levels of their platoon.”

“Once their plan is communicated to every member of the platoon, the Cadets will then conduct rehearsals and eventually execute their plan to conduct whatever mission had been assigned to them.”

Some of the missions Cadets can expect throughout their time in the FTX lanes include conducting raids, ambushes, reconnaissance missions and defense — just to name a few.

Once complete with the third and final phase of FTX, Cadets will return to their barracks to complete the remainder of their time at Advanced Camp.

How Will Cadets be Assessed? 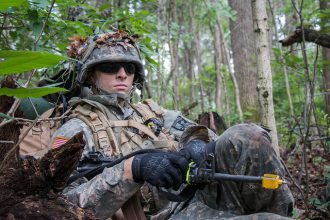 Cadets use grass, leaves and camouflage face paint to blend in with their environment during their time in the FTX.

In a typical college classroom, students receive standard letter grades to assess how well they’re absorbing the information and applying it accordingly. Here at Advanced Camp, however, Cadets are evaluated on a whole different spectrum.

“Out in the field we assess Cadets on various dimensions of their leadership attributes and competencies,” explained Col. Garey. “We’re not looking for whether they create the perfect tactical plan because the Cadets don’t have that level of experience and the background to be great tacticians.”

“Instead, we’re looking at things such as do they have and show confidence in themselves and their abilities when briefing their platoon. Are they making timely decisions and are they using the information available to them to make a sound and timely judgement call?”

Out in the field, communication and leadership are crucial to the platoon’s dynamic. The ability to effectively communicate a plan to every member of the platoon in a way that invites participation and criticism allows for all voices to be heard, promotes group cohesion, and provides an outlet to determine the best plan of action.

“Something that is almost as important as being a good leader, if not more, are those times when you’re not in a leadership position,” stated Garey. “If you can’t be a good team player during the 11 or 12 days when you’re just a platoon member, it’ll become very apparent to your fellow Cadets that something is wrong.”

Spiders, snakes and ticks are just some of the wildlife Cadets can expect to find in the field. Can you spot the spider?

Although the critical component to evaluating a Cadet’s performance is determined by how well they demonstrate their leadership attributes and competencies in the field, Cadets are also assessed on their ability to utilize their skills, conduct and execute a plan as well as supervise the activities of the unit to complete the mission.

In addition to the standard blue cards that are used for assessing leadership attributes and competencies, Cadets will also participate in facilitated after-action reviews and peer evaluations to gain further insight on how their Cadre and Cadets perceive their abilities in the field.

The purpose of an F-AAR is to encourage Cadets to openly discuss what went well, what went wrong and what could have been done differently during a mission. Although questions may be prompted by Cadre, for the most part these conversations about both encouragement and improvement are generally carried out by the Cadets.

Peer evaluations, on the other hand, help to identify a Cadet’s strengths and weakness from the perspective of his or her fellow Cadets.

“Sometimes Cadets can be very tactically proficient but aren’t great at communicating with their fellow Cadets,” stated Garey. “When they receive their peer evaluations and see how their peers perceive them, it can be very effective in getting them to change their behavior and encourage them to improve their leadership and communication skills.”

The Future of Tactics 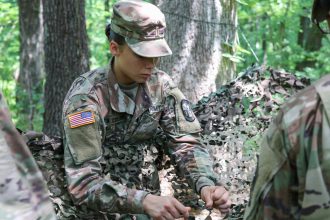 For these 2nd Lts. helping to prepare for Advanced Camp Tactics, it seems like only yesterday they were here as Cadets trying to survive the FTX.

With the first of the Advanced Camp regiments gearing up for their two weeks in the field, this year marks Col. Garey’s third summer working in Advanced Camp tactics for Cadet Summer Training.

In these three years, Col. Garey has made it his mission to create an environment that pushes Cadets out of their comfort zone, allowing them to discover what they’re truly capable of.

“During the school year we rarely have the same amount of time where we can, for 14 days, put Cadets in this kind of environment where you’re physically and mentally exhausted and put under extremely demanding conditions.”

It’s in these 14 days where Col. Garey has observed Cadets at their lowest of moments but also where he has witnessed those who have risen to the occasion, despite the difficult environment. 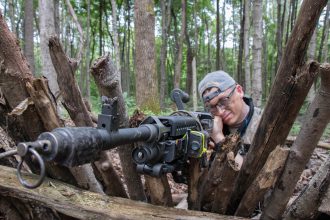 During their time in the FTX, Cadets will have to face Opposing Forces in near-peer conventional threats.

“By the time these Cadets make it to FTX 2, they’ve been out in the field for 10 days,” said Garey. “They’re hungry, they’re tired, they’re dirty and they’re frustrated.”

“You’ll find some Cadets really struggle to control their emotions and you’ll find some that excel under these physically and mentally demanding environments, which allows us to assess those leadership attributes and competencies.”

As for this year, Col. Garey and his team seem optimistic about how Cadets will perform during their time in the field. Despite the Kentucky summer heat combined with the difficult terrain, it is here in the thick woods of Fort Knox where strong future Soldiers are born.

Each year spent at Cadet Summer Training has brought about ways to better improve the FTX for years to come, including different training techniques, focusing on near-peer conventional threats rather than counter-insurgency and ensuring that Cadet’s health and well-being are top priority. 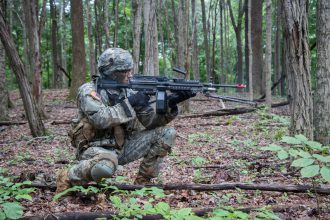 Raids, ambushes, and reconnaissance missions are just a few of the tasks Cadets will be given during the FTX

“We want to make sure that our training model is keeping up with the Army’s standard,” said Garey. “As the Army changes, the training here changes and we want to consistently ensure that the training we provide here is the best it could possibly be.”