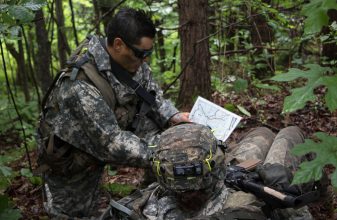 Cadets consult a map before taking on their next objective, June 22, 2018 at Fort Knox, KY. (Photo by Angela Yin)

FORT KNOX, KY. —“We’ve been in the woods for at least a week minimum, but I’m losing track of [the] days,” Cadet Amber Presto from Florida Southern College laughed.

Presto’s Advance Camp Regiment has been in the field for 15 days. They have entered the final half of their stay here at Fort Knox.

The Kentucky climate keeps Cadets damp, but they learn how to keep themselves in good spirits by savoring the small things.

“There’s a lot of times when you’re just not motivated,” Abe Mitchell from Indiana University shared. “Then, the sun comes out, and you get to dry your feet.” 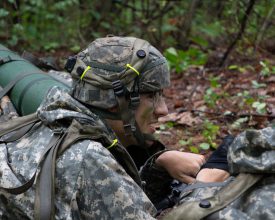 “We are about to conduct an ambush,” Presto said.

The Cadets had broken for lunch and were collecting themselves for the final objectives of the day.

“We’re just trying to keep each other up. Bodies are sore. We’re tired,” Presto admitted. “The MREs only sustain you for so long, so it’s definitely tough, but we’re trying to pull together as a team.”

Cadets joked around in their off time. Their attitudes seemed to overpower exhaustion. 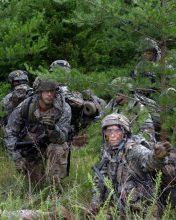 “People say it’s not about the tactics, and to an extent, it’s not. [Mostly,] it’s to see how leaders are going to react in stressful situations and how they are going to adjust,” Presto said. Cadets in leadership positions must make quick decisions and relay those choices to their platoon.

On top of “enemies,” severe weather, and carrying everything they need in packs, Cadets have been fighting to keep alert.

“We don’t sleep a lot out here,” Mitchell smiled. “I probably got three or four hours; we haven’t gotten more than six the whole time we’ve been out here at Fort Knox.”

In spite of drowsiness, Cadets acquire valuable experiences in the field, which they can bring back to their home college. “It’s about taking everyone else’s experiences who’s been here before and adjusting to see what works for you,” Presto said.