Movie physics has spoiled us! Directors demand ridiculous situations to wow audiences and drive movie sales, yet inadvertently, they implant false understandings of how firearms function.

“I got a lot of questions from my students back in the day, ‘Sergeant, can you curve a bullet?’” Sgt. 1st Class David Morris recollected. “Every time I shoot, the trajectory is parabolic in nature.”

Which is to say, bullets do not travel left or right, but up and down.

“In the past, we’ve had a couple of individuals state very firmly that they don’t believe in gravity—that the bullet moves in a straight line until it comes to a complete stop, and then it falls straight down,” Morris said. 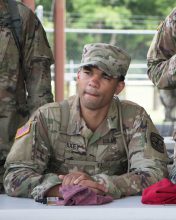 These convictions are outlandish, but misconceptions are often passed down by friends, family, Hollywood, or any other seemingly trustworthy source. Without a high-speed camera, the bullet is too fast for eyes to follow so, any claim about a bullet’s trajectory could be believable. It’s their team’s job to correct and dispute false knowledge.

These three outdoor classes will prepare the student and the rifle for the zeroing and ALT C qualification. Morris explained that while many Cadets have worked with firearms, “most of them haven’t touched it in a while, or at all. It’s important to bring them up on what things are properly called.”

In lay terms, the three classes were as follows: rifle maintenance, positions and marksmanship, and bullet ballistics. These broad categories cover the entire process of firing, start to finish.

“Who lost a firing pin? You’re going to need that.”

The smallest malfunctions turn high-powered firearms into metal clubs. Cadets broke down, inspected, and assembled their weapons, while instructors watched.

“There’s a lot of people who have not touched this weapon before.” Cadet David Dwight from Northern Arizona University said. “So, they brought us up front, and they gave us some basic instruction.” 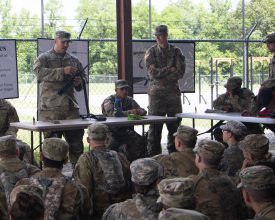 After giving a full demonstration, pointing out parts, their names, and functions, instructors sent Cadets back to their stations to practice.

“Then, to end it in a fun way, they had a competition where we did three-on-three, flip-cup style.” Cadets tore the weapons apart and put them back together in a race. Of course, functions checks determined their efforts.

“We want to ensure that the weapon is serviceable and it will perform when it gets out for the live fire portion,” Morris explained.

At another station, Cadets learned the basics of body positioning and marksmanship.

“This is simulating the firing line at the qualification range,” Master Sgt. Joshua Eherenman said. “They are going to get down into the prone supported position, and just get comfortable with the weapon.” 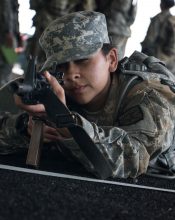 In unison, the front line scooted their boots out, sliding into position. They practiced their aim and dry fired their weapons. Some instructors laid down in front of the Cadets to provide one-on-one instruction.

Cadets have a significant influence over their weapons system. Even changes in breathing cause aim to shift.

As soon as the bullet leaves the barrel, Cadets have no control over it. Which means Cadets must have a full understanding of where the shot is going to go.

At the final station, Cadets learned how to zero their weapon using the Minute of Angle, an advanced method of deriving how the bullet is falling at a specific distance.

“It’s just math,” Eherenman explained. Traditionally, Cadets would learn how to zero their weapon by looking at inches in the distance of where their rounds are impacting on a zeroing target. This target contains drawn boxes which indicate how many clicks they have to move.

However, with MOA, Cadets can zero their weapons at 25 yards using one sheet of computer paper and a red dot, which are much more accessible compared to specially made targets.

It takes only a second for the round to impact the target, but knowing how to counteract those external forces helps land the bullet where intended. 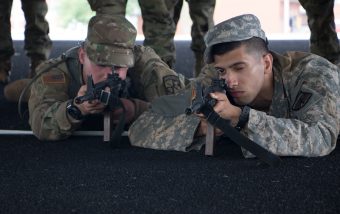 Instructors take this marksmanship training seriously, “so that tomorrow is not the very first time [cadets] do any of this.”

With qualifications today, yesterday’s quick dry-run gave cadets opportunity to let go of bad habits and build confidence in their knowledge of their weapons.