FORT KNOX, Ky. — Every exercise at CST provides Cadets an opportunity to explore the roles of leader and follower. Every one of these Cadets in 3rd Regiment, Basic Camp will take on a leadership role, then give it up to another Cadet.

While negotiating obstacles at the Team Development Course, our future officers are learning how to navigate ever changing team dynamics. Throughout an officer career, they will be asked to give and follow orders.

The physical challenges and constraints are stressors which test the leader’s decisiveness and followers’ humility.

At “Sgt. Yestremski’s Crossing,” Cadets had 12 posts, four lengths of wood, and an imaginary river rushing below.

“Of the six lanes, this is one of the most challenging,” 2nd Lt. Ben Kusinski said. “They can’t touch any of the yellow, so they have to figure out how they can use the black part of the peg to get across.”

And, none of the boards reach all the way. Part of the challenge is deciding when and where to move the planks.

The natural flow of a team dynamic goes from “storming” to “norming” and finally, to “performing.” Which is to say, first, there’s a power struggle as the leader takes charge. Then, leaders develop a way to get ideas from the group, and individuals in the group stop grabbing for power. Then, in the performing stage, the roles are defined, communication is open, and the team is optimized. 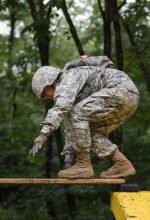 At the crossing, they have to gather ideas from everybody, Kusinski explained. It’s a lane where the squad leader has the final word, but they must think as a group to get everyone across.

The real danger lies in over-planned inaction or thoughtless action.

“It just comes down to executing the plan,” Kusinski revealed. “A lot of times they’ll waste time standing on the pegs figuring out to do, rather than executing and taking action.”

All the obstacles have the same time limit and planning period, but some have a smaller margin for error. Each second counts, especially at the crossing.

Both a leader and a follower. 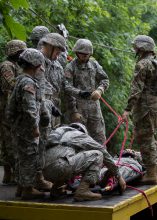 These challenges have no real consequences, other than potential disappointment. At “Chaplain Henderson’s Bridge,” eight Cadets had to get an “unconscious” Cadet across a cavern. They only had ropes, a stretcher, a pulley, and a tension wire strung between. Poetic, how the lane named after a Chaplin involved rescuing the helpless.

Three thick mats lay between the two points. Two Cadets on either side made sure that falling Cadets would hit the mat and not the earth.

Those “Safeties” to the side cheered their squad on, yelling out encouragements.

“You just want to keep everyone’s morale up,” Cadet Nicholas Hornbuckle from the University of Northern Georgia said. “We try to push each other to keep going.”

Third Regiment’s motto for the summer is “we will never quit.”

Then, all four pulled the stretcher across. As soon as the “injured” Cadet reached the other side, they placed her down on the platform. At this point, the Cadets had finished the demanding job. The rest of the group began to cross the chasm. 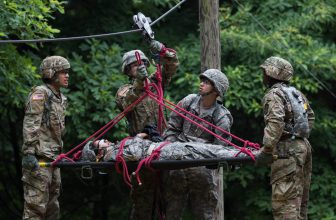 Both frustration and encouragement peaked when one Cadet stopped in the middle. They could go no further. Safeties to the side and Cadets on either platform shouted encouragements, but strength gave out. The safeties let the Cadet down.

Disappointment showed across the Cadet’s face. The feeling of defeat was palpable. Call it what you will, but this was not a failure. This was recognition of a limit, a test of strength and endurance. How the Cadet and the team react to this will reveal their strength of character as leaders.