Amidst the gunfire and low-crawls, fighting in the thick of the woods, Cadets from 2nd Regiment, Advanced Camp fought to win back their prisoners of war.

Sunday made the third and final day of the platoon Situational Training Exercise for the Cadets. During this training Cadets practiced operating as a platoon in a non-conventional war setting.

The first day of STX was Cadre-led. Cadre walked and talked Cadets through each scenario and each battle drill. After this, they progressed to being Cadre-assisted. During this time, the Cadets took charge, but Cadre walked with them to assist when it was needed. The last phase was Cadet-led. Cadre were able to sit back and watch them, but still steer them in the right direction if they needed it. 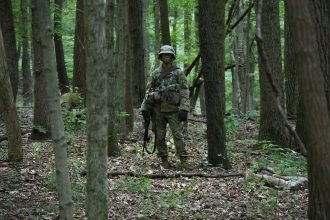 While in the field, the Cadets face physical and environmental challenges on top of learning new tactical skills. Capt. Craig Darrenkamp from the University of Illinois Chicago said, “for a lot of Cadets, this is the first time they’ve been out in terrain like this.”

The terrain is a bit hilly and the woods are thick, being filled with trees, vines, and brush. The temperature at Fort Knox hot and humid, which is something that Cadets have to adapt to. On top of that, the Cadets have the physical strain of their equipment.

Darrenkamp explained, “I just want them to learn probably about for or five more things than they came in with. So, they’re not going to leave here as tactical or technical experts on any of these things, but hopefully they have a better overall understanding of how it’s supposed to go and how it’s supposed to flow so that when they’re in positions of leadership, they’re capable of planning and setting themselves up for success.” 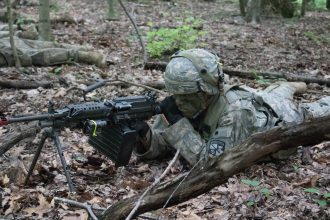 Cadet Remy Adrian from the University of North Carolina Charlotte was part of the opposing force, which was who the Cadets were fighting against. The opposing force was holding the “prisoners of war” for the exercise.

He expressed that the hardest part for him during this exercise was getting stuck together as a new group and figuring out how to work together as well as sorting out what skills everyone knows individually so that they can be a well-rounded team.

Darrenkamp said, “The purpose is 1. Coming together as a platoon, and 2. Set their own tactical and technical procedures for moving through missions such as this and also get them before their evaluation phase that is coming up next.”

After all of the training, it can be said that the Cadets definitely left the platoon Situational Training Exercise “with a bang.”

Ready on the range