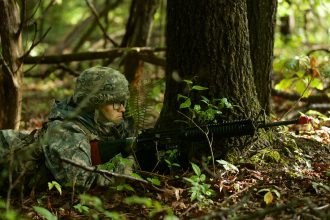 Security is paramount in the lives of the Cadets of 2nd Squad, 3rd Platoon, Alpha Company, 1st Regiment, Basic Camp as they conduct situational training exercises during their field training exercise event at Area of Operation Badger June 17 in Fort Knox. By Joseph Barkoff.

For the FTX, the Cadets spend five days in the woods while conducting practical classes, moving tactically, and living in patrol bases. They set up a patrol base by securing an area so that they can maintain their weapons, eat, and prepare for their missions.

They maintain a level of security at all times and attempt to mitigate their signature while living in the field.

In the morning, the Cadets wake up, pickup, and begin to move towards their assigned objectives.

“Typically, you want to use a terrain feature to your advantage when you flank. Since you didn’t have that, you needed to go back further in the brush,” instructed 2nd Lt. Brett Smith, a graduate of Western Michigan University, during a field after-action review. “The goal of flanking is too gain advantage by maneuver, but you really want to stay concealed while you do it.” 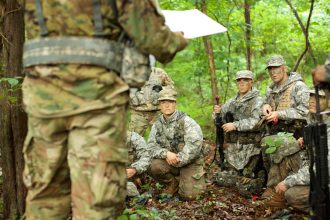 Cadet Cooper Duplantis from Virginia Military Institute was the squad leader during a react to contact STX lane. React to contact often means that the Cadets must react to a hasty ambush from hostile forces, but contact can encompass the mere sight or smell of the opposition. Today, their contact was in the form of drawing unexpected fire.

Duplantis listened to his squad during the after-action review, who aired their confusion on one of the commands. Some of the Cadets failed to hear the command “shift fire”, which means the support team moves the focus of their fire away from the objective, ensuring the assaulting element can safely push through the objective. Essentially, the goal of this action is to avoid friendly fire.

Cadet Amfry Sanchez, an MS3 trainer from Fordham University addressed the Cadets during the after-action review. 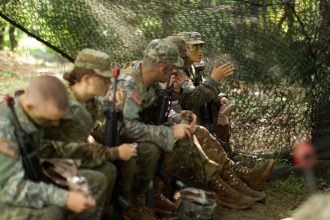 Cadets of 2nd Squad, 3rd Platoon, Alpha Company, 1st Regiment, Basic Camp conduct an after action report and have some chow following their situational training during the field training exercise event at Area of Operation Badger June 17 in Fort Knox. By Joseph Barkoff.

“It’s essential that you guys sound off when you are on line,” Sanchez said “You might not be on the same page and it could end badly next time.”

“I think the biggest takeaways were not only sounding off when echoing commands, but also just working as a cohesive team,” said Duplantis. “It goes without saying that organizing a squad’s leadership well and disseminating information effectively ends up defining the success of the mission, and I feel we did that well enough today.”

These Basic Camp Cadets learned valuable lessons that will serve them well as future Army officers.