The Cultural Understanding and Leadership Program gives the opportunity for Cadets to participate in military training and engage in humanitarian works throughout the world. 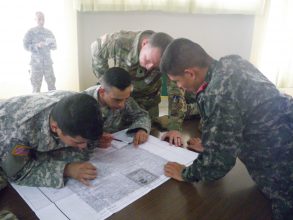 Cadets Cristian Melgar from the University of Central Missouri, and Kenneth Baretto from Interamerican University of Puerto Rico, work together with Honduran Cadet, German Alfaro to pinpoint the correct grid coordinates at the Honduran Military Academy in Tegucigalpa.

Recently, Cadets from Honduras, Vietnam, and Thailand returned to the United States after spending three weeks with their CULP teams out-of-country. This experience is meant to train future army officers on how other cultures and militaries operate.

Cadet Dana Gertschen, who deployed to Honduras, described the importance of CULP for future officers, “As a leader, it’s important to have perspective. A leader with perspective can think about a situation or a problem in a wise and reasonable way.” 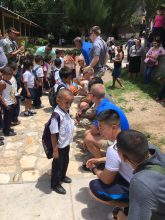 Cadets from Team Three and Four visit the children at the Escuela Juan Ramon Cueva de Primera in Copán, Honduras to hand out treats and toys.

She also stated, “It has truly formed for me a solid foundation of greater thinking, cultural awareness, knowledge, gratitude, and perspective that I can build upon as I progress with my military career. I will continue to improve as a leader by sharing all that I have learned from this opportunity and by pursuing experiences such as this to continue improving myself and leadership capabilities.”

The Cadets got the opportunity to leave behind cultural barriers by being able to play with the children and brighten their day. Cadet Kyle Newton, returning from Vietnam, said, “I enjoyed every aspect, but what really stuck out to me was our humanitarian engagements.”

Newton described his love for volunteering with the SOS villages, which are places for disadvantaged children who either come from a broken home or don’t have family. 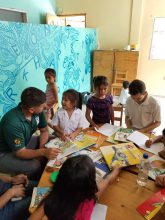 Cadet Cristian Meglar experienced personal growth during her time on CULP mission as well, explaining, “This experience has helped me learn a great deal about others, different cultures, but most importantly about myself as an individual and a leader. My time in Honduras has come to an end but the influence that it has had on me is something that I will carry with me and continue to share with others.” 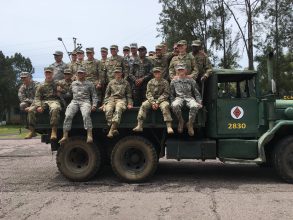 Cadets from Honduras Team Three and Four ride a deuce-and-a-half at Teson, the Honduran Ranger and Airborne School in Tamara.

Cadet Amy Herrera, returning from Thailand, said that her favorite part was visiting an elementary school and getting to interact with the kids there. While she was in Thailand, they were able to learn Thai culture while also teaching English, among other assignments.

The most important lesson that she learned while on the CULP deployment was to “always be humble.”

It seems as if most, if not all, of the Cadets came away from the CULP experience with immense personal growth as future army officers as well as great memories.