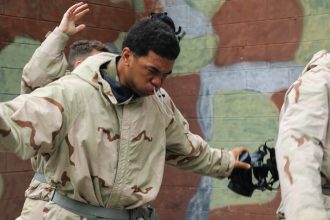 After a morning of preparing to enter the chamber and learning how to use the equipment properly, cadets lined up to run laps and sing songs while breathing in the gas from the NBC Chamber.

Cadets are briefed on the process that happens inside of the chamber, and how to gain the most of their experience.

The purpose of the CBRN chamber is to build the Cadet’s confidence in their equipment and to experience first-hand, the effects of the CS gas that simulates potential chemical and biological agents that could potentially be used against them in a combat situation. 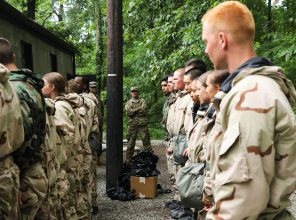 Cadets being briefed on their equipment before entering the NBC Chamber. (Photo by Haley Brown)

Building cohesion and confidence within the Cadet’s platoon is imperative in a Cadet’s training during CST.

With tears in her eyes and mucus running down her face, Cadet Catherine Lynch, McDaniel College, touches on the importance of CBRN training.

“It helps us learn how to trust each other, how to motivate during battles,” she said “And how to keep going on, it builds cohesion.”

Participating in CBRN training brings the cadets together and creates a united front within their platoon.

Many Cadets had smiles on their faces after their arms stopped flapping and the effects of the gas started to wear off. 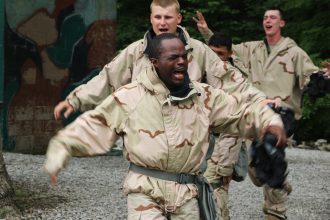 “They made us walk around like three times in there and wow, that was some heat on my face right there,” he said with a smile on his face. “It’s burning, it burns.”

He emphasized the importance of participating in CBRN training and why it is a vital part of CST.

“Most people think they can’t do it going through, but once you get done with it,’ he continues. “You’re like, ‘I did it, I can do it. With my platoon, my friends and family’, you’re all one now.”

Fort Knox Wants You for OPFOR!

Confidence Course: The Name Says It All