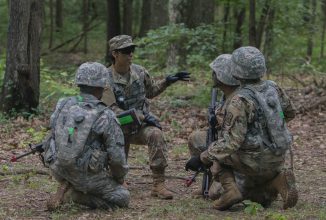 FORT KNOX, Ky.—Seeds sprout even in harsh environments. However, a greenhouse creates a climate where seedlings thrive. These seedlings are fortified, strong, and ready to rise above the rest. Some degree of leadership lives in us all, but Basic Camp is a greenhouse where leaders are grown.

“This is a hasty linear ambush on a moving target,” he said. A target is going to come down the road, and they are getting in a fixed position out of the way of the enemy. “Then, they are going to initiate contact, once the enemy comes into the kill zone.”

Barry acted as squad leader for the majority of the lanes. He mentioned that he was in a unique position because of his active duty, prior service. 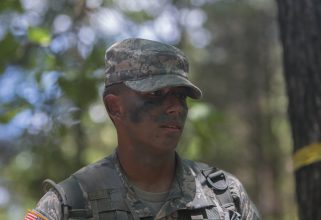 “It’s even better,” Barry said. “I can show them some knowledge that I picked up throughout my active duty while they are also learning the lessons.”

However, Barry was sidelined for this scenario. This was the first lane where one of the Cadets stepped up as squad leader for the patrol.

Bicoy’s MS3 Trainer had encouraged him to take on leadership roles and work through those hitches in communication.

“We all come from different places, routines and programs, so the tiny things are what matters,” Bicoy explained. “Everyone has different input, and different thoughts.”

“Ultimately, as Squad Leader, I’m the person who needs to make the final plan from everyone’s ideas, putting aside my own ego,” Bicoy said. 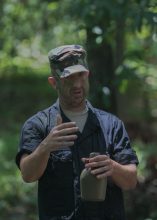 Sgt. James William Ward from Roy Washington provide realism as Oppositional Force. And, since all OpFor in this event were NCOs, they witnessed the squad’s tactics first-hand, allowing them to give invaluable critique.

“Today’s day one, so we are very much kid gloves,” Ward said. “Tomorrow, since they’ll have done it before, we’ll pick up the pace a little bit.”

The Map to Success