Fort Knox, Ky. – The Cadets of 3rd Regiment, Basic Camp arrived at Morgan Reiley Range with an array of emotions as they geared up to execute zeroing and weapons qualification – a vital part of Cadet Summer Training 2018.

Two things stick out when talking with the Cadets. One, they are all just as chipper and energetic as they were upon arrival to Basic Camp (some even more so now with the confidence gained through the first half of camp). Two, there is an exuberance of competitive fire and spirit amongst the Cadets, especially when it comes to Platoon recognition. 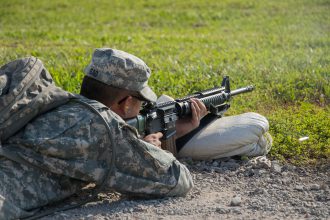 With the Cadets half way through Basic training, they continue to elevate one another through competition. Each Cadet strives for personal achievement and growth and in the process comes the acceptance and admiration their respective platoons earn from Cadre and peers alike.

“We like to make it interesting…it’s all about the bragging rights” stated  Jeter before reminding Rendsland that 2nd  Platoon was awarded “Most Motivated” during the Regiment’s time at the Chemical, Biological, Radiological and Nuclear defense chamber. 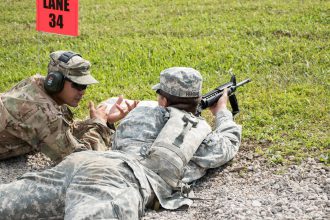 Amongst the playful jabs and competitive tension, the Cadets made sure to note that, although competitive, they were all united as one big family.

“We know we have to have each other’s backs. Everything we do, we do as one.” Stated Jeter as she turned and looked at  Rendsland.

Being there for one another is an important message that the Cadre here at Fort Knox seek to instill in the minds of the young Cadets that they can take with them even after their military careers. We can all strive for individual accolades and success, but the true measure of a person is their ability to inspire those around them to reach heights they never imagined possible.

Proverbs 27:17, “As iron Sharpens iron, so one person sharpens another.”

Cadets Austen Miller of Ohio State University (Left), Leroy Banks From University of Hawaii (Middle), and Joshua Hennesy out of the University of Georgia (Right) having some fun before conducting their zeroing/qualification tests at Cadet Summer Training 2018. (Fort Knox, Kentucky, 2 July) Photos by: Jakob Coombes