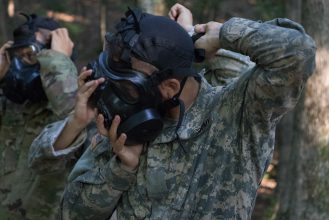 FORT KNOX, Ky.—Cayenne pepper is a season of choice for many, but purposely breathing it in is not. CS gas feels as if ground cayenne pepper is in your airways, sinuses, eyes, and on your skin. Your mind can only focus on the pain flanking you from every angle.

The NBC Chamber took center stage Monday during 5th Regiment, Advanced Camp’s CBRN contamination training. While this was a painful experience, it does not compare to exposure from a stronger substance.

CBRN training covers chemical, biological, radiological, and nuclear events. America’s enemies have no problem using these warfare tactics. In an effort to protect their Soldiers, the Army has spent time and resources to provide the best protection possible. 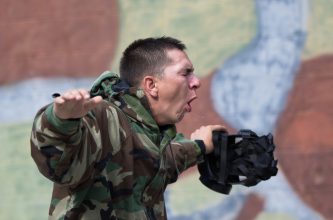 One of the best ways they can provide that protection is through this training. Nine seconds after someone yells, “Gas! Gas! Gas!,” masks must be on and correctly sealed. The Cadre at Station One made sure Cadets met that benchmark, even while blind. Carrying pouches are worn on the left leg, and the mask is always oriented in the bag the same way, so after pulling it out several times, the motion is ingrained.

At another station, Cadre displayed pressurized Nuclear, Biological, Chemical Reconnaissance Vehicles. As soon as operators seal the doors and turn on the overpressure system, contaminated air cannot enter. These vehicles are sent out to confirm, identify, or deny the presence of contaminants.

While some Cadets had previously been through the chamber, it was a new experience for others. 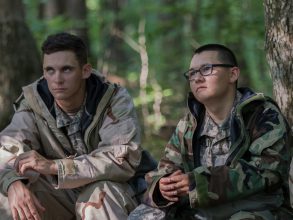 “I’ve never been in the CS chamber,” Cadet Austin Barnes from Western Kentucky University admitted. “I’ve heard a lot of horror stories about the CS chamber before, but recently, some of these guys have told me that it’s not that bad. As long as I get to air out pretty quickly afterward, I think I’ll be fine.”

Barnes said he knew it was to be unpleasant. Like many things in life, you just have to deal with that.

“I think the whole thing is about [keeping] your composure,” Volpe said. “It’s just another training event that we have to go through.”

Cadet David Pitchford had been in the CS chamber for Basic Training since he is a prior service member. With his experience, he helped ease other Cadet’s nerves.

“They’re going to ask us to inhale it, so we can really get a good feel of it,” Pitchford explained. “When I inhaled it [last time], it hit me in the back of the throat, and it burned, but it was okay.”

Finally, it was 4th Platoon’s turn. 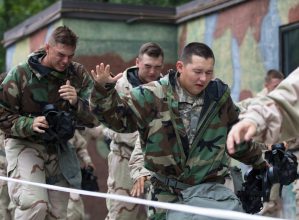 Inside the chamber, masks kept the gas at bay. Cadets turned their heads in all directions, but the seal did not break. After jumping jacks, it was time to remove masks.

One by one, NCOs had Cadets lift their mask 90 degrees, say their name, announce where they are from, and sing a short song. After their hesitant rendition of the ABC’s, the mask was back down so they could breathe cleanly again.

Then, Cadets formed a conga line, tore off their masks once more, and did a few laps, coughing and hacking along the way before peeling out the exit. Cadets flapped their arms to speed gas evaporation and sang cadence songs to clear their airways.

Barnes said it was still an unpleasant experience; however, he added, “it was also just as easy as everyone said. It’s just something that you have to keep going through.”

Even though it hurt, Cadets had full confidence in their equipment and Cadre.

“You have a mask, and a lot of trained professionals in there, and they’re not going to put you through something that they wouldn’t go through themselves,” Volpe added.

Creating leaders one word at a time

Cadets Pop Out to Qualification Range