FORT KNOX, Ky. – Fort Knox celebrated its centennial July 4, 2018. The celebration comes after the 100th birthday of the base and one hundred years of service to the United States of America. Families on and off base as well as Cadre and Cadets were invited to partake in this auspicious occasion. 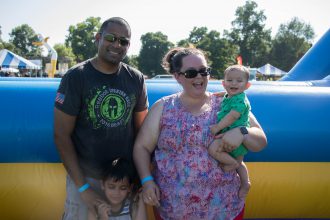 Bouncy houses, live bands, and raffles from donors and sponsors were free to the families, Cadre and Cadets attending. There were also eating competitions, arts and crafts, and games for all ages. While attending Fort Knox’s 4th of July celebration is a tradition for some, others experienced the event for the first time.

“It’s my first time here and I’m really impressed by the people and everything here for the families. I didn’t realize how large this event was with the music and bouncy houses for my son,” Jamie Jacobi as she watched her youngest son, Jensen Jacobi, while her husband, Deepak Jacobi, watched her oldest son, Adrian Jacobi, on the bouncy houses. 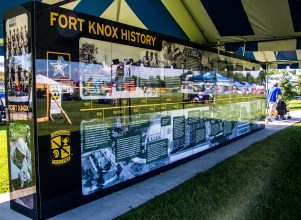 One of these additions was a timeline showing captioned pictures from years past, starting with the founding of Fort Knox and progressing through history until present day.

“Today, across our nation, 300 million Americans will celebrate the 4th of July with hot dogs, watermelon, and fireworks and bands and fellowship, but less than five million of them will be men and women who have served in our armed forces or as civilians or as the spouses and family members of our nation’s servants. Give yourselves a round of applause for your dedication and what you do for our nation.”

“It’s an honor and a privilege to be here and serve with you at Fort Knox. My family and I have enjoyed our experience thus far and we look forward to many more good months here at Fort Knox. Thank you all for being out here today. I want to say one thanks to our Garrison team across all of our directorates and particularly MWR for putting things on today and keeping you safe, fed, and watered down. Stick around. We have fireworks. Enjoy the rest of your evening and God bless.”

The final addition was the presentation of the 50 state flags and the six U.S. territories by 2nd lieutenants. Each state was honored by a single cannon fire and one for the six territories.

“What we did for the ceremony is we took the state flags so each lieutenant had a state flag. Then, we went in front of the stage and presented the flags to the public,” explained 2nd Lt. Stephanie Brouwer, graduate from the University of Tampa. The state flag ceremony is symbolic for the different states and territories uniting under one flag as well as being represented at Fort Knox during the 4th of July centennial.

2nd Lt. Nicholas Clancy, a graduate of St. Bonaventure University, participated in the state flag ceremony and commented on the celebration. “It’s very exciting. Not everyone gets to be part of it and, so far, it’s been a great time out here. It’s a very welcoming place. I actually love the 4th of July and think it’s a lot of fun and the firework show is awesome. The people here are fantastic and I love the bands… The fact that it’s a hundred years is pretty exciting to be a part of that.”

As commissioned officers, the 2nd lieutenants reflected what it meant to them to be an officer of the United States Army.

“It’s nice to feel like you’re contributing to something bigger and it really makes you appreciate being a part of the 4th of July,” stated 2nd Lt. Amanda Nash, graduate of University of New Haven.

“To be a 2nd Lt. means being greater than yourself. It’s not like working for a company. It’s very personal and there’s a different drive,” added 2nd Lt. Kevin Carson, graduate of St. Bonaventure, communicated.

Fort Knox celebrates the centennial 4th of July. The twenty minute firework show at the end of the evening concluded the 100th 4th of July. Photo by: Madison Thompson

“To be part of the Army, to me, is more being able to connect with like-minded individuals. You basically join this brotherhood where everyone is meeting their goals and making others better, improving as a whole, rather than just the individual. We look more at the big picture and I really enjoy that,” conveyed 2nd Lt. Brouwer. “Being able to be a part of this at Fort Knox is super awesome. I would’ve never thought I would get the chance to do that. It just happened by chance and got this detail. It was a really cool opportunity and it won’t come around again for quite a long time.”

Through its hundred years, Fort Knox’s purpose has evolved multiple times from Camp Knox during World War I, being responsible for training and armored formations, and now being a versatile instillation crucial for training, recruitment, and support. 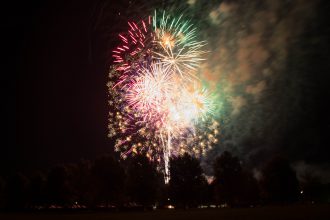 Fort Knox celebrates the centennial 4th of July. The twenty minute firework show at the end of the evening concluded the 100th 4th of July. Photo by: Madison Thompson

The evening concluded with a night of fireworks and a sky of shimmering lights. Two hundred forty-two years to the day, the United States of America declared independence from Great Britain. Fort Knox’s mission, to serve and protect this nation through support and training, has never wavered and will continue to serve our great nation.