FORT KNOX, Ky – With both hands gripping the cargo net in front of her and the cheers of her fellow Cadets echoing around her, Cadet Victoria Anderson, University of Tennessee at Chattanooga, pulls herself up over the obstacle, remaining cognizant of the brace protecting her injured knee. 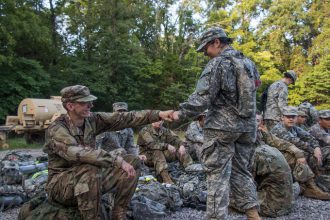 As she places both boots on the ground, Anderson is overcome by applause, hugs and shouts of, “that’s our Superwoman!” It’s here, at Beaudoin Obstacle Course, where the Cadets of the 6th Regiment, Basic Camp, learn the true value of teamwork.

Sure, climbing a cargo net, shimmying up a rope and swinging from rung to rung on the monkey bars is something people accomplish on their own, but without twenty other Cadets cheering your name, reminding you of how strong you are, how much fun would that be?

“I was extremely apprehensive when we first arrived,” admitted Anderson. “I tore my MCL a few years back and re-tore it shortly after we got here.”

A Cadet from 6th Regiment, Basic Camp, maneuvers his way up the rope climb at the Beaudoin Obstacle Course.

“I have a brace about the whole size of my leg underneath my uniform.”

As if overcoming nearly a dozen obstacles fully-abled wasn’t hard enough, Anderson was doing so with torn ligament in her right knee.

“It was rough,” said Anderson. “A lot of it was finding the definition between being smart and being stubborn.”

Despite her injury, Anderson credits her fellow Cadets for getting her through the morning’s exercise.

“These people,” smiled Anderson as she looked over her shoulder to where her fellow Cadets were catching their breath. “These people are everything.”

“They call me Superwoman, they cheer me on and make me feel like just like everybody else.”

Although the purpose of the Beaudoin Obstacle Course is to develop their communication and teamwork skills, the Cadets also treat the course as a means for some friendly competition.

“We’re working on team camaraderie and team building but we also have a little competition between the squads,” said Cadet Samuel Mcleod, Marion Military University.

With two squads going through the obstacle course at the same time, Cadets can’t help but push to see which squad can get through with the fastest time.

Despite the competition, said Mcleod, It helps us come together and it teaches us that we can actually overcome much more than we had originally believed.

As Cadets continue to swing, climb and crawl through the obstacle course, Mcleod sounded optimistic about his time here at Cadet Summer Training.

“I’m learning a lot and I’m having a lot of fun,” laughed Mcleod. “I think today’s going to be a really good day.”

When You Can’t Rely on Technology