Fort Knox, KY- Cadets of 5th Regiment, Basic Camp were deep into the woods Tuesday afternoon performing a squad level ambush against mock oppositional forces. With camouflage painted across their faces and their M4 weapons locked and loaded, these Cadets were more than prepared to accomplish the mission.

Accompanied by a second lieutenant as a mentor, these Cadets waited patiently. Uneven terrain filled with heavy shrubs helped with concealment while they waited for the enemy to cross their into their area. “We have to be as silent as possible,” explained Cadet Henry Jackson III, Bowie University. “We have to get to the enemy without being seen or heard.” 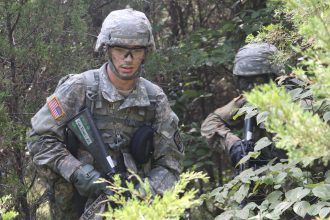 Cadet Mitchell Van Erem, University of Wisconsin leads his squad into the woods during FTX. Photo by Gia Cruz.

Cadet Van Erem, University of Wisconsin, was the squad leader for the ambush mission and  admitted being a little stressed with the amount of responsibility given to him. “I was the man in charge, and everyone’s looking up to you. I had to tell people what to do and where to go.”

Both Jackson and Van Erem also discussed how communication was key for this mission in particular. “Communicate more with your team leaders,” Van Erem advised, “so that everyone knows what’s going on.” Jackson says that without communication, things can get a little confusing. “The communication barrier would have to be the hardest part.” 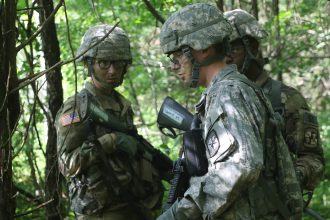