FORT KNOX, Ky. – Often in life we are forced to climb on in situations of hardship, while in other moments we must decide to take a blind leap and hope that all our preparation will lead to a graceful landing. The Cadets of 9th Regiment, Advanced Camp learned that great obstacles in their lives can be not only mentally challenging, but also physically demanding, as they took on the Rappel Tower and Confidence Course during Cadet Summer Training 2018. 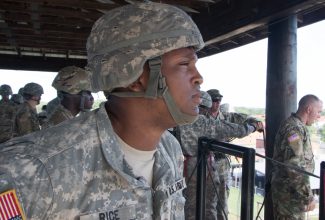 Most people started their morning rolling out of bed and enjoying things like the morning news, a nice breakfast, and a cup of coffee; instead, the Cadets of 9th Regiment were treated to a stomach wrenching 64-foot tower. Everyone has the thoughts of self-doubt as they begin the climb to the top. Some Cadets handle their fear better than others, or at least do a good job of not showing it. However, there’s always something about staring straight down to the ground from a birds eye view that makes even the bravest of the bunch start to feel weak in the knees.

Mark Twain once said, “Courage is resistance to fear, mastery of fear. Not the absence of fear.”

For this group of Cadets, there is no better way to sum up their accomplishments. Although every one of them felt the paralyzing grasp of fear hit their bodies, they dug deep and doubled down on their courage. Some Cadets took the challenge head on with tears rushing over them. Still, they managed to shuffle to the edge of the platform, compose themselves, and take the leap of faith. 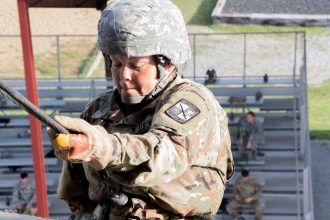 For Cadet Dawn Mcluckie, University of Kentucky, she chose to find humor in everything standing in her way saying, “You have to be able to laugh. Laugh at yourself, laugh at the ridiculousness of the moment, laugh at the memories you’re creating. Without laughter, I wouldn’t be able to get through this.”

Once the Jumps have been completed, the Cadets are rewarded with a chalk marked “X” on their helmets and the opportunity to move on to the Confidence Course.

Made up of a series of challenging obstacles, the Confidence Course was designed to test the Cadets’ physical fitness and mental fortitude. There are no harnesses to lock the Cadets in, they have to maneuver through the course with nothing more than their own capabilities. Quickly, the Cadets learn why its called the “Confidence” Course; they will need to find confidence in themselves, as well as confidence in their teammates. 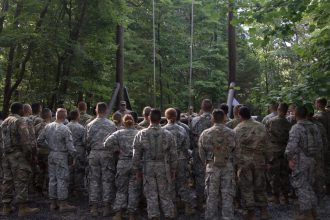 For the most part, the Cadets hold their own throughout the obstacle course. However, all roads lead to the “Tough One” which doesn’t get its name for being a walk in the park. Made up of a 15-foot rope climb, an open bridge walk, ladder climb to a 30-foot peak, and a netted rope to descend, the Tough One is a troubling challenge. One by one, the Cadets scurry up the rope and begin their climb of confidence to the top of the structure. One by one, they get closer to defeating their fears. One by one, they are molded into the leaders of tomorrow.

Mentally and physically drained, the look of accomplishment and self-satisfaction oozes from every pore. Their fear still remains, but has lost its potent sting. Masters of their fear, the courageous Cadets climb on to the next challenge, ready for whatever is thrown their way.

“America was not built on fear. America was built on courage, on imagination and an unbeatable determination to do the job at hand.”