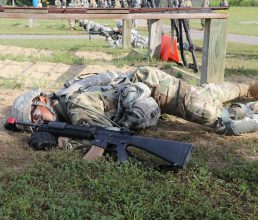 “We’re going through some movements. Trying to figure out low crawls and high crawls and how to get from cover to cover,” explained Cadet Gabriel Huerta, Loyola University. Cadets were paired in battle buddy teams and were taught how to use individual movement techniques to avoid contact from enemy fires. 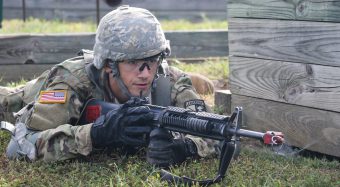 “I’m feeling good,” expressed Cadet Solace Palisano, Missouri State University, in between breaths. “I want to branch infantry, so this is right up my alley.” This training required the Cadets to move with a sense of purpose and effectively communicate with their comrades when they were set, offering protection from direct fires.

Huerta also added how this was a fun environment with the fake explosions and using blank rounds. “It was a good time.” As Cadets were wiping away sweat from their eyes, there were friendly fist bumps exchanged and encouragement spread amongst them. 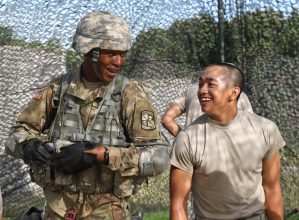 “I think Basic Camp as a whole, kind of shows who’s put in their time to prepare and who’s able to think on their feet,” said Palisano. “It also shows who is willing to show some heart when we’re doing the physically demanding stuff.”

The Map to Success