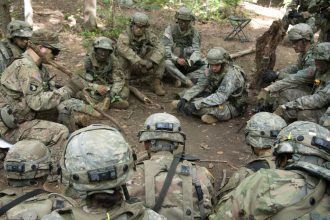 Once the Cadets were briefed on their mission, it was time to rehearse. For Cadet Jacob Roberts of Towson University, missions remind him what it means to be a leader in the United States Army. “We are all here to learn to be leaders and be able to take instruction and implement a plan. The best lesson I have learned in STX is how to take a mission the Cadre created and developed a plan from it,” said Roberts. 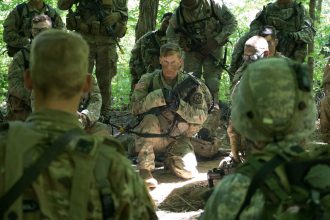 In a life or death situation like an ambush, a strong leader and teamwork is vital to the success of the mission. For these Cadets, their teamwork is only beginning. Each platoon houses roughly 40 Cadets, meaning 40 different personalities. With this diversity, communication is incredibly important.

“The most mentally challenging aspect of STX is learning to work together with people you have never worked with before,” said Cadet Candice Goldsmith from the University of North Texas.

It can be difficult to hear during an ambush, so it is important for Cadets to know their terrain well and listen for orders from their platoon leader.

“They’ve never done this before and this is their first time working together, so knowing the terrain and doing all of the planning for it is important. For a lot of them, this is their first look at terrain like this,” said Second Lieutenant Jay Pasenelli. 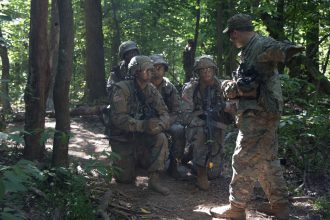 The STX provides an opportunity for Cadets to practice planning missions they may encounter later on in their military career and understand the skills it takes to effectively lead a platoon, no matter the location. As future officers in the United States Army, experienced gained and lessons learned during STX will guide them throughout the rest of their career whether in the states or on deployment.

Listen well. Trust your teammates. Have confidence in yourself. STX with it, Cadets.