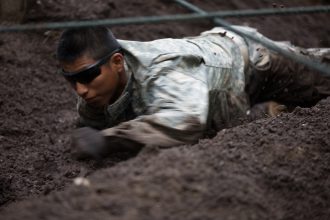 A 7th Regiment, Basic Camp Cadet crawls through the mud as he races against another platoon participating in the Beaudoin Obstacle Course at Fort Knox July 22, 2018. Photo by Dustin Massengill.

After weeks of improving their marching skills, meshing together as a unit and honing their leadership Cadets were awarded with a chance to let off some steam with some friendly competition. The obstacles included a rope climb, mud crawl and a wall hurdle.

The Cadets were excited to get away from their barracks says Cadet Don Diego Florencio, State University of New York at Buffalo.

“I am just happy to get down and dirty,” Florencio said. “After the red phase, being in the barrack and getting smoked all the time, I am happy to get moving.” 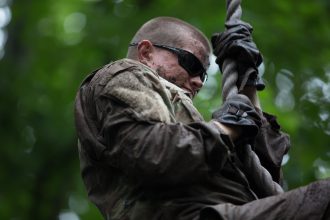 A 7th Regiment, Basic Camp Cadet climbs a rope as he races against another platoon participating in the Beaudoin Obstacle Course at Fort Knox July 22, 2018. Photo by Dustin Massengill.

The Cadets started with a tour of the obstacle course. They were briefed on the tips and tricks of each of the obstacles before they started the races.

It was less competitive and more about building up their battle buddy bonds and supporting each other according to Cadet William Ventura, Virginia Military Institute.

“It’s been a fun two weeks, and this is a good culmination of the past two weeks,” he said. “Getting to know each other and having fun in our element, encouraging each other.” 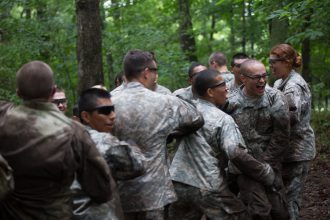 The main competitive event was to see which platoon was capable of finishing the entire course in the fastest time. Before running groups flexed their comradery and sang, chanted or screamed mottos, sometimes using them to inspire or embolden those struggling, Queen’s ‘Bohemian Rhapsody’ was popular among Cadets attempting to rally.

Cadet Manuel Hernandez, St. John’s University, says the cool morning was enjoyable and provided a chance to push himself.

“I am happy to be out here with all my buddies.” “Just getting down and dirty and just going through all of these obstacles, and just testing yourself, seeing what you can and can’t do.”

The winners of the obstacle race was the 3rd platoon for speed and 4th platoon for team motivation.