FORT KNOX, Ky – As one of their final field training exercises, Cadets from 4th Platoon, Alpha Company, 6th Regiment, Advanced Camp defend their newly acquired territory from an opposing platoon in a swift firefight on July 21, 2018. 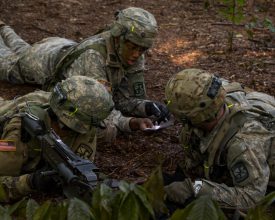 Being placed back into the field after inclimate weather the night before, the Cadets had their boots back on the ground in the early morning to reclaim their position.

“We set up an objective rally point,” stated Cadet Kurtlynd McLane, New Mexico State University. “[Then], we scouted out this area to make sure it was still cleared… Right now we are just waiting for the enemy force that, based on intel we received, would come and try to seize this terrain again.”

Following the orders of the platoon leader, Bennett Erickson from St. John’s University, the Cadets placed security ring of ‘Joes,’ as they called themselves, around the perimeter of the area.

“The [platoon leader] does all the planning,” Cadet James Melanson, University of Vermont clarified. “As the platoon sergeant, I’m worried about execution, personnel, ammo, and equipment. [The PL]’s worried about the big picture, PSG is little picture…The PL and the PSG, that’s mom and dad. That’s where all the decisions are made.”

While the Joes stayed low with their weapons focused ahead, watching for enemy movement amongst the trees, the gun teams made preparations for the fight. 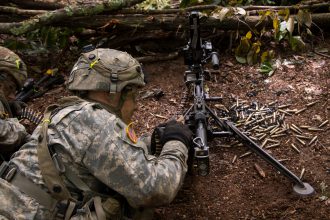 “Right now we are finding our left and right limits for this gun,” M240B gunner, Cadet Aditi Tailor of University of South Carolina explained before the fight. ”It’s the biggest gun in the whole platoon. We want a well defined area that we can fire, so we’re covering as much ground as possible… It’s more effective that way.”

As one of the most important weapons in the fight, the 240B had a team of three: the gunner, the ammo bearer, and the assistant gunner, each having their own role in shooting the large machine. Unfortunately for this platoon, they were only issued one 240B, rather than the typical two, challenging them to optimise the use of their best weapon.

When the oppositional force swept in, the Cadet quickly moved into action. Weapons fired shot after shot of blank rounds, slowly fending off the enemy.

“The fire fight went a lot longer than most of our lanes do,” Cadet Melanson said. “We had an issue with ammo this morning…So, I was running around like a mad man trying to keep the guys we had in the fight, supplied with ammo.”

He, eventually, set up an ammo point at the center, instructing a handful of Cadets to start loading magazines. 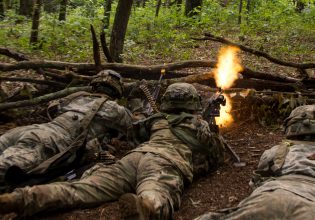 In addition to a low supply of ammo for the front line of defense, the Cadets found themselves with a jammed M240B amid the fight.

“Cadet Taylor was on the 240 originally,” Ronald Righard, Indiana University of Pennsylvania, said. “It jammed once and she was able to unjam it. Then, it jammed again and Cadet Richards tried to hop on the 240 and he couldn’t unjam it, so I gave him my m4. I ended up unjamming the 240 by opening up the feature with my gerber and got to stay behind the gun.”

Despite these challenges and two “casualties,” the Cadets of 4th Platoon found victory in their defense against the enemy, boosting morale and giving the Cadets pride in their accomplishment.

“Finally getting to shoot, getting action, and really getting to work as a team, this has been the best FTX we’ve had so far,” asserted Cadet Devin Stossmeister, Mount Saint Mary University after the fight.

I’ve Got Your Back