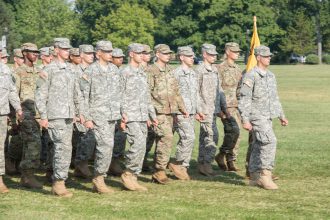 2nd Lt. Kasey Greenfield, a graduate of Texas A&M University, noticed an extraordinary difference in the demeanor of a lot of the Cadets – particularly their sense of pride – between the beginning of camp and graduation.

Towards the end of camp, Greenfield stated, “a lot of them would stand up straighter,” and just wear the uniform a little differently.

Between the homesickness, drill sergeants, and physical standards at camp, Cadet Debora Reynoso Perez, was ready to quit at day four.

Today the incoming freshman at Georgia Military College received the Military Order of the Purple Heart Badge of Merit for her development of Character and Accountability over the course of her past 31 days of training.

“I feel more disciplined,” said Reynoso Perez. She described how camp challenged her physically, mentally, and emotionally, emphasizing her sense of accomplishment at making it through camp.

Sitting on the bleachers next to Cadet, and friend, Maryum Yusuf, Reynoso Perez stated that she feels like she can keep going, expressing how glad she was to have stuck through the nearly five weeks of Basic Camp.

“I feel very motivated,” stated Yusuf. “I feel like I–,” she paused then re-started, asserting “I have achieved something.”

Yusuf reflected on how she gained a sense of accomplishment through camp, noting her biggest takeaways are the inspiration she got from other people and the experience of helping others and letting others help her. 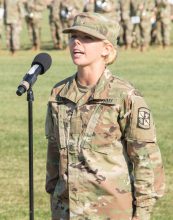 “I feel wonderful about today,” she expressed. “It’s one step forward to being an officer.”

During the ceremony, Cadet Lacey Kemp, a student at Arkansas State University, recited the Cadet Creed, outlining the role and value set of a Cadet in the US Army.

Greenfield selected Kemp for this role at graduation because of her demonstration of “extraordinary military bearing and confidence in any kind of position.”

He praised her command presence in her platoon sergeant role, noting her ability to communicate and keep tabs on individual Cadets while maintaining a presence in the platoon as a whole.

Kemp considers the promise to take an oath to commission as a second lieutenant a big deal.

“It reminds me … of the commitment that I’ve made to serve my country,” stated Kemp.

Cadets Pop Up on the Range