Each Platoon from the Bravo and Alpha company fell in to position and marched to the beat of the Drill Sergeant and his commands. One Drill Sergeant in particular, Sgt. 1st Class Ryan Neely, expressed the importance of Drill and Ceremony. 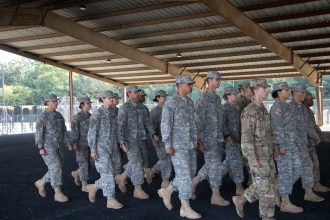 “The amazing thing about Drill and Ceremony is it’s not just necessary here, but also in the battle field. If you look back on old war movies you’ll see they used a drum when marching. That meant everything moved at a command, at a cadence, at a single beat.”

He continued, “if there wasn’t movement to a beat and people decided to jump out there and do what they wanted to do, someone would die. Even today, unlike terrorists, we have formations, movements, and accountability that instill discipline and uniformity as a whole.”

Drill and Ceremony is not just a sequence of movements and steps to memorize, it is the tool that brings together hundreds of thousands of Soldiers and allows them to act one single Soldier.

“Drill and Ceremony has always been very important to me, I believe it is the backbone of military discipline,” expressed Cadet Connor Shields from the University of Delaware. Shields was the leader of the 3rd Platoon, Alpha Company Cadets.

“I have been doing Drill and Ceremony for about five years now and it is something that is very important for a future Soldier to know.”

Each Platoon of Cadets from Alpha and Bravo Company marched with precise steps alongside their Drill Sergeant; focusing on each command given to them. Being that it was a competition, the Cadets were graded on their performance.

Luckily, that didn’t shake them up during their performances. “I was nervous performing in front of my peers and the judges, but I was also really excited because I knew this was something we had practiced and perfected,” said Cadet Taylor Flanagan from Georgia Southern University.

The 6th Regiment, Basic Camp Cadets marched to the beat of their Drill Sergeant, their squad mates, and the Military. Their uniformity and discipline is what will uphold the fine standards of Military excellence.