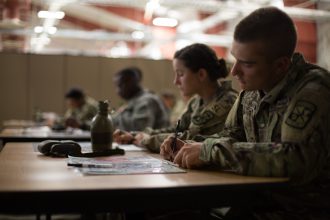 The must pass training consists of a 45-minute lecture, followed by practice tests. After the initial training Cadets are given four attempts to pass the written test that follows the training.

The training’s primary focus is to teach the Cadets how to call for indirect fire support. Indirect fire is when artillery is used because a Soldier is unable to reach a target with direct fire weapons. 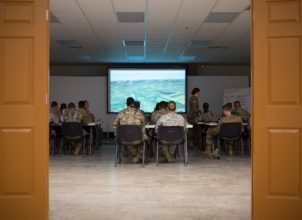 “What we teach here is about being very consistent and very confident in what you spot,” Hesketh said. “You can link it to different skills and to just being confident in yourself.”

During the training Cadets work with a virtual reality training tool. A computer in the back of the room projects a virtual rendition of a map on the table cadets have on their tables. Cadets call for fire on a target until they finally hit the target once. After making contact with the enemy they will ‘fire for effect’ eliminating the target and successfully ending the mission.

Cadet Hyder Kayani, Texas A&M University, said his school and his Cadre at CST have prepared him well for the test.

“They did a really good job of teaching us,” Kayani said.

Cadet Colin Everett, Indiana State University of Pennsylvania, says Cadets should remain calm and listen to instructors and they will have nothing to worry about when they test.