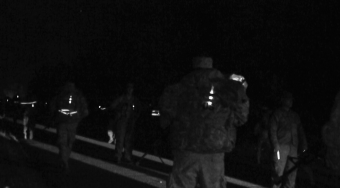 Beginning 0300, the Cadets of 7th Regiment Basic Camp formed up by companies to complete their 10k, or 6.2 mile, ruck march.

Unlike Advanced Camp, the Basic Camp ruck march is a one-way walk and Cadets do not have a time limit for completion. The Cadets from Basic Camp also ruck in a two-line formation.

“Everyone is feeling great. We just came off our field training exercises and we are just about done with training so that means we get to go home,” stated Cadet Ryan Kennedy, University of Vermont.

The course for the Basic Camp also takes Cadets up and down some of the steepest grade hills here on Fort Knox, which requires a lot of mental strength to push through.

Cadet Kennedy said that for him, this ruck is all mental. “You look at the ruck and think its physical because you’re carrying a lot of weight a far distance and up big hills, but it’s all about your attitude and your friend’s attitudes, that really pushes you through.”

Walking in the Dark