FORT KNOX, Ky – Cadets from 7th Regiment, Advanced Camp woke up in the early morning hours of July 30th, 2018 to step off for the 12-mile ruck march, the last critical event before graduation.

“I’m about to knock out this 12-mile ruck march with 35 pounds on my back,” Cadet Jhory Miller, Norfolk State University, declared. 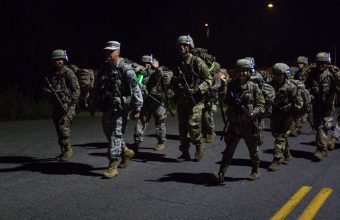 For this ruck march, the Cadets carry a minimum of 35 pound of gear from the field. This prepares them for future combat situation where they will be carrying larger rucks for long periods of time.

Sorted by Company colors, the Cadets prepared for the march, hyping each other up as they waited for their start time. At 0330, Alpha Company began, followed by the other three companies in ten minute intervals to give space between each company.

“This is what we’ve been looking [forward to] for a long time,” Cadet Jabril Cross, Southern Illinois University Edwardsville, stated. “It almost feels like yesterday when we came out for our fire drill and we saw second regt. doing it. We finally made it – its about time.” 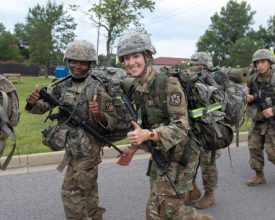 With a steady pace, a march lasts around three and a half hours, which can make it difficult when all they do is walk. To pass the time and keep morale high, Cadets sing, crack jokes, and get to know each other more. The tunes of the morning included “I’m Gonna Be (500 mile)” by The Proclaimers & “All Star” by Smash Mouth.

“We were telling stories, so that kind of helped distract from the pain in my shoulders – most embarrassing moments, funny moments,” Cadet Emily Grace Mewborne, University of South Carolina elaborated. “…Someone said that the best date they’ve ever been on was a guy took her to Disney World on the third date. That’s pretty impressive.”

Testing the endurance and strength of these future leaders, this ruck march is a monumental barrier. Cadets push themselves to new limits to make a good time that will show they are ready to graduate Advanced Camp.

“Through some of the rucks we’ve had, a couple people fall back,” Cadet Robert Fahy, Texas A&M University, said. “We were worried about this 12 mile [for] them, but they pushed through hard. By seeing them push through and dig in with that intrinsic motivation and watching them finish, makes me feel amazing.” 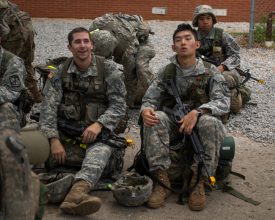 This event is when health becomes a major focus. The Cadets are repeatedly told to hydrate by medics who travel alongside them during the march. They were even provided a few small snacks, such as ice-pops, to keep their energy high.

When they caught sight of their barracks, the Cadets were relieved that they had made it. Their journey was over and they could finally take off their rucks and rest.

“It feels good, feels like your gonna float away,” Cadet Joel Baldwin, Mississippi State University, described. “…You’re hurting, so it feels really good to drop it, sit down, and take your boots off.”