Ft. Knox, Ky. – Every summer, Cadets from all over the nation join together to defeat mock enemy forces at Fort Knox. Cadets are assigned to destroy peers that are dressed in a black button down and phased out uniforms. The question is, who exactly are these enemy forces? 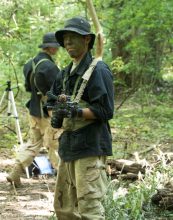 As Cadets from 3rd Platoon, Charlie Company, 10th Regiment, Advanced Camp were practicing how to conduct a raid during a situational exercise, the opposing forces were patiently waiting.

OPFOR, which consisted of rising MS3 juniors explained why participating as the bad guys has been a very rewarding experience. “I volunteered for OPFOR, going into my MS3 year,” Cadet Patrick Ewing, University of Southern California began, “I definitely wanted to improve my technical knowledge, some of the tactics and really what Fort Knox was like in the greater Advanced Camp experience.” Ewing also added that it seemed like a great idea since it would help him improve his understanding of tactics significantly more. 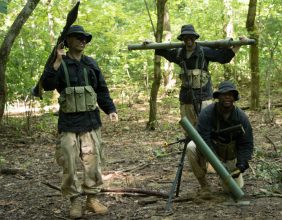 “Most common mistake, that I’ve been seeing with Advanced Camp is that Cadets are too loud, many voices going off at once.” Ewing reflected on the observations that he has seen through every Regiment as he plays the position of OPFOR during their ‘crawl’ phase. “They are still trying to find their command and control.

Ewing additionally said that his experience at Fort Knox will help him bring more of the in depth details and the realistic chaos.  “There are two types of Cadets,” Ewings expressed, the prepared, and unprepared.

Dustin Lamb, Arkansas Tech University commented on the pros and cons that he has seen with Cadets that walk through his lane. “When they start their actions on, they get into a big cluster,” he says. ‘When they get on the objective it becomes a very unorganized massive chaos, they have to learn how to communicate.” 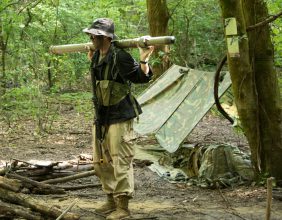 “I can see the mistakes that Advanced Camp Cadets are making so that when I’m at Advanced Camp next year, I can take that into account and mitigate any mistakes,” Lamb expressed.

Lamb also encourages Cadets to volunteer to be the ‘bad guys’ for the summer. “You will get more experience being OPFOR because you will know the ins and outs of Advanced Camp.” Lamb emphasized that nothing can prepare you more for Advanced Camp than actually watching them go through.