Ft. Knox, KY– Deep within the vegetation of Atropia, there’s an enemy force that is described as far worse than any other Cadet force known within the Cadet Summer Training program. These enemy forces study their victims every morning and make it their mission to attack at night. 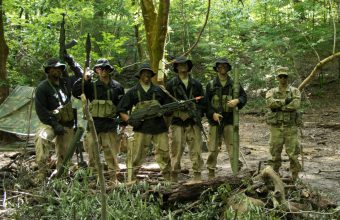 These bandits, that wear a natural black mask and fitted gloves seem to be an issue for even the Cadets that play the role of the bad guys.”For the amount of trash they leave and the havoc they have caused, we have never had eyes on these raccoons. Opposing force member Patrick Ewing, University of Southern California playfully says, “they must be traveling in either a squad sized element, or a very organized company sized element.”  The rising MS3 Cadets that make up OPFOR created the slogan “OPFOR runs the day, while raccoons run the nights. 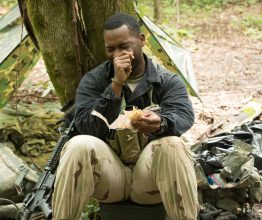 Cadet Orion Murphy, Grambling State University, laughs as he tells his stories about the Raccoons on August 1, 2018. Photos by Gia Cruz.

“The qualifications to be an SF [Special Forces] Raccoon is harder than any other course that any Special Forces operator has ever known,” says 2nd Lieutenant Pablo Platero. Platero has been personally victimized by these ‘Creatures of the night’. “One of them stole my protein shake,” he said in all seriousness,”There’s some raccoon out there that must be jacked.”

Master Sergeant Shane Werst, Clemson University was quoted as saying, “While one of the raccoons are busy taking bags of MREs, he has his whole security squad working.” Werst also added that they must be out learning tactics. “These Raccoons are probably Air Assault qualified with the way they jump off from trees.” 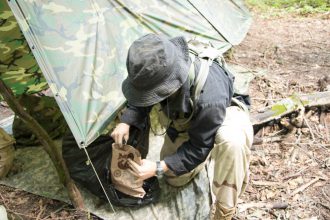 Werst also revealed how these critters have walked off with valuable items that were later retrieved.”There was a lieutenant around here that had a raccoon take his FLC [Fighting Load Carrier] with a radio in it. These guys are bold!”

One things for sure, no matter what school, rank or amount of experience a Cadet or Cadre member may have, these black masked bandits will forever be common enemy number 1.