FORT KNOX, Ky. – With only three days left until graduation, Cadets from 7th Regiment, Advanced Camp must begin asking themselves, “What’s next?” Lucky for them, Branch Orientation provides some answers.

Cadets from 7th Regiment, Advanced Camp listen as Cadre explain why they should choose their branch during Branch Orientation at Cadet Summer Training in Fort Knox, Ky. 1 August. (Photos by: Amanda Surmeier)

Cadet Anna Farmer from the University of Oregon has a decision to make. As of now, she has narrowed down her selections to Field Artillery, Military Intelligence and Aviation.

Farmer’s first choice, Aviation, is something that has always appealed to her, and will aid in the job hunt after her 20 years in the Army.

“What drew me in was the rush of flying and I believe it has applications in the civilian world, so after I’m done, I could do some commercial flying,” said Farmer. 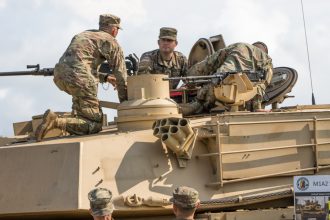 Master Sergeant Warren Johnson agrees that Aviation will set Anna up for a lifelong career, “This is one of those fields where the army is spending a million dollars on your training, so you’re held to a higher standard. When you get out, you can go work for airlines and a plethora of other things.”

Military Intelligence appealed to Farmer’s problem-solving skills. “I’ve always been interested in solving puzzles, so I thought it would be a really good fit, being able to sit there and problem-solve and use those skills to solve any problems the army has.”

Military Intelligence involves collecting, analyzing and interpreting battlefield information to support the decision making process of commanders in combat. Lieutenant Tanya Johns said, “Military Intelligence gives you a better understanding of what’s going on in the world around you. You’re able to see the underlying story of everything.” 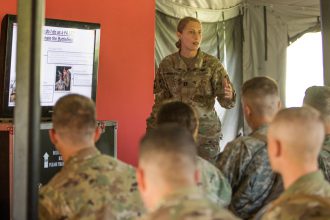 Cadets from 7th Regiment, Advanced Camp listen to Captain Austen Boroff as she explains why they should choose Field Artillery during Branch Orientation at Cadet Summer Training in Fort Knox, Ky. 1 August. (Photos by: Amanda Surmeier)

Farmer’s interest in Field Artillery stems from her family history. “Both of my grandfathers served in the military in field artillery. I’ve heard a lot about it, so I’ve always had an interest in it,” said Farmer. “I like the idea of field artillery because you shift around jobs every few years, so it keeps you versatile and on your feet and not just stuck in one job.”

Captain Austen Boroff, Field Artillery Officer, said that, although it was not her first choice, she feels lucky to have been placed in this field.

Boroff has a lot of pride in her field. “We blow stuff up – that’s what we’re known for. We’re the largest platoon in the US army, that’s what I always brag about.” Not only does Boroff enjoy the explosive aspect of her job, the promotion rate and growth available keeps her satisfied, “With any combat arms branch, you’re going to have a great promotion rate. We’re a growth branch, meaning we’re investing a lot of money into continuing to build our assets,” said Boroff. “I’ve gained a confidence in myself that I never had. I learned things about myself I didn’t know. I learned how to communicate to a team.”

After each Cadet commissions following graduation, they are separated into different branches of the army. During this selection, Cadets rank their top 10 branch choices out of 14. Entrance into each branch is competitive, so although Cadets may have their heart set on one branch, the military may decide their talents are best utilized somewhere else. No matter which branch they choose, or which branch chooses them, these Cadets will go on to be confident leaders in the Unites States Army.

Recounting the Tale of the Chamber