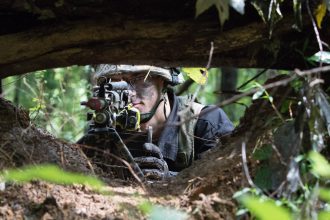 During the first day of their field training exercise, the clouds left no mercy on Cadets preparing for their mission. Weighed down by rucks and wet uniforms, Cadets from Alpha Company trudge through the Kentucky woods in an area of operations known as Panther. This sector of the woods gives Cadets their first taste of field training exercises that are not led by Cadre.

“We moved tactically to an ORP [objective rally point], which took quite a while because it was so wet and rainy. We had Cadets falling,” said Cadet Logan Litman from The University of North Dakota. He served as the Platoon Sergeant during this mission.

When asked how he combatted the weather he replied, “In weather like this, the way to keep morale up is just to keep a positive attitude. What you do reflects on other people.” 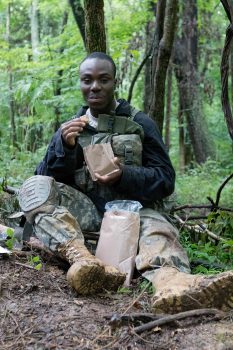 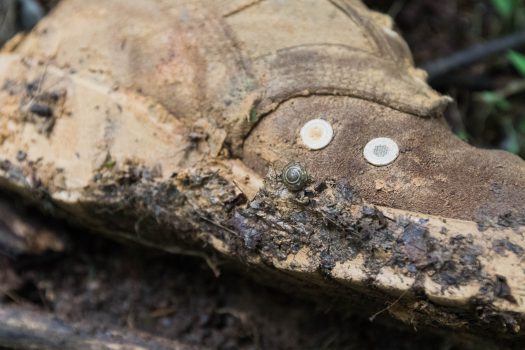 A Cadet shows off a snail he found on his boot after the mission was complete. Photo by Scarlet VanMeter

Cadet Dawn McLuckie from The University of Kentucky served as the mission’s Platoon Leader.

“Unfortunately, you cannot predict what Mother Nature will do to terrain and that definitely slowed us down,” Cadet McLuckie sighed. “On the trek here, the open fields were completely saturated and so many of us slid and fell and now we look like swamp monkeys.”

with the Quartermaster branch. Her experience before coming to Cadet Summer Training has proven helpful while preparing for the field.

“In a mission like this, I understand the importance of having all of the supply needs met,” Cadet McLuckie explained. “We have to carry all of our food and all of our ammo for the four days we are out here, in addition to any of our personal hygiene items that we require. We had to make choices in reference to what we were gonna carry. The weather is supposed to be nothing but rain for ten days. Being prior service–being able to plan and understand what the necessities are in the field environment definitely gave us an advantage in packing the rucks so they were not as heavy.” 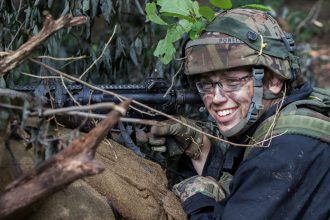 Cadets are still smiling despite the weather. Photo by Scarlet VanMeter

Overall, the mission was successful. When completed, the cadets were soaked and exhausted; however, smiles were plastered to their faces just as much as mud.

“Running through the mud is really tough because I haven’t done it in years,” chuckled Cadet Jessiel Gonzalez from The University of Puerto Rico.  “I feel like a kid and you feel everything in your feet and they get wet and everything but it’s fun. You’re sucking and you look back at your teammates and they are sucking too but everyone looks at each other and laughs because we are in the same situation so its part fun and part sucking, but it makes my day.”