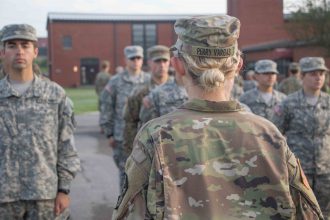 D&C consists of the proper way to move and hold oneself while in formation. The competition is a new addition to Cadet Summer Training this year.

Cadet Jamie Bridenstine, who completed Advanced Camp this summer, is working as a Military Science III trainer at Basic Camp.

Bridenstine, a student at the University of Wyoming, stated that D&C builds discipline and helps people work as a team. She went through Basic Camp in 2016. 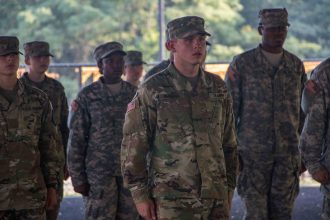 Cadets from 3rd Platoon, A Company participated in a Drill & Ceremony competition on August 2, 2018, at Fort Knox, Ky. (Photo by Emilia Kuentz)

“We focused on D&C but it wasn’t to the extent that we had a competition or practiced for that many hours,” said Bridenstine, adding that she definitely would have liked to have had a D&C competition at camp.

During the competition, each platoon went before drill sergeants to be judged based on their performance and the highest scoring platoon from A and B Company were to perform again to be scored against each other.

Cadet Tevor Stinson, a student at Boston University, called the event a good opportunity for some friendly competition.

“I think it’s a good way to foster some esprit de corps amongst the platoon,” explained Stinson. 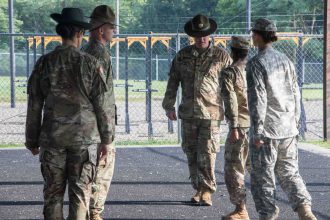 The competition extended to the individual level as drill sergeants scoured 3rd Platoon, A Company, picking off Cadets, until they found the one most adept at D&C.

Cadet Destiny Rosario, a student at the University of Texas at Arlington, was the last woman standing and received loud cheers from her platoon.

Following the competition, after 2nd Platoon, B Company finished posing for photos they were forced to do push-ups because they fell out of formation before being told to do so.

No Such Thing as a Fear of Heights