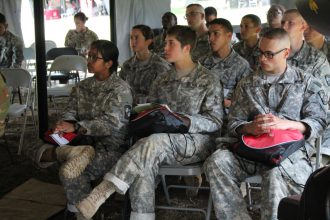 Cadets are integrated as they listen in to Engineer Officers during 7th Regiment, Basic Camp, Branch Orientation. August 3rd, 2018. Photo by Gia Cruz.

Fort Knox, Ky.– As tents were lined up side by side with basic branch Officers within them, Cadets of 7th Regiment, Basic Camp went touring for the many options that the Army has to offer. Within these tents, many Combat Arms including Field Artillery, Infantry and Engineers were beginning to fill up with young and ambitious female Cadets.

January 2016 marked a day in history lifting since the ban on women joining combat branches. This achievement allowed female Soldiers to fight next to their male counterparts and equally participate in any event within the Army.

“The Military is based on wars and fighting for our freedom,” said Cadet Meaghan Ambelang, University of Wisconsin- Stevens Point. “If you choose any other branches, you are just supporting, so might as well join the fight.” 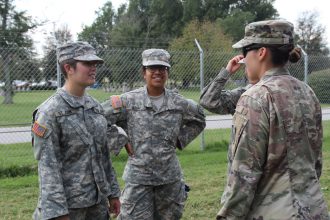 Ambelang, a college sophomore, has expressed her interest in considering Infantry, The queen of battle, as one of her branch choices. “We can match up to males if we put our minds in to it,” she said. Ambeland also discussed how the integration of the Army was a pretty cool idea and jokingly added that the only difference we will now have are latrines and showers.

Skyler Leak, University of California- Santa Barbara, explained how events like branch day has shifted her views towards Combat Arms, to a point where she is now considering it as a life-long career. “I definitely want to go Combat Arms,” said the young Cadet, “I don’t exactly which one, they are all really interesting.” 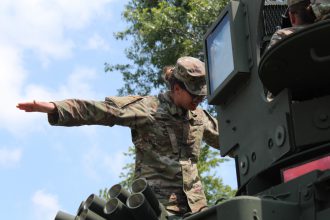 Cadet climbs aboard an Armor Vehicle during Branch Orientation on August 3rd, 2018. Photo by Gia Cruz.

Leak added that her experience at Basic Camp has helped solidify her choice of becoming an Active Duty, Combat Arms Officer. “They say a lot of the time women think differently than men do, which allows for good teamwork between both,” Leak added, “I think that women are fully capable to go Combat Arms if they want to, and that’s really exciting to have the opportunity to do that.”

With females visiting tents with their male battle buddies in branches such as Armor, Air Defense Artillery and Infantry to just name a few, it is enlightening to see the Army move forward and as one.

A Test in Teamwork: CASEVAC