FORT KNOX, Ky.— Cadet Michael (Aryeh) Urist from 8th Regiment, Advanced Camp, carries more than the standard weight in his rucksack during his time at Cadet Summer Training. Urist carries a week’s worth of MRE’s and the pressure of maintaining his religion in the field.

Urist is an Orthodox Jew, meaning he adheres to the Torah. He follows strict jewish law on Shabbos, the Jewish Sabbath. He is the first Orthodox Jew to complete Advanced Camp since camp has been hosted at Fort Knox.

He eats a kosher diet which restricts him to only a few MREs (Meals Ready to Eat) while in the field. Because that type of MRE is a special-order item, he has to order all of his meals in advance and has to carry all of them with him while he goes throughout his field training exercises.

“About 95 percent of the items in normal MREs are not kosher,” explained Urist. “At the end of the day, it is the responsibility of [the cadre] to feed you, especially when you are in an austere environment in the woods.” 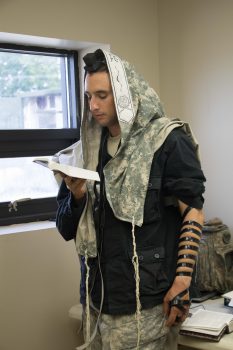 He also carries in his ruck his Tefillin. Tefillin are a pair of black leather boxes containing Hebrew parchment scrolls. A set includes two—one for the head for intellect and one for the arm opposite the heart. They are used by Jewish men above the age of 13 for morning prayers. Sometimes, he has to adjust his prayer time depending on when his field missions are.

“You have got to pick and choose your battles,” Urist said. “The Army philosophy is mission first. If you respect that philosophy and you respectfully ask your leadership for five to ten minutes to pray, they will usually be accommodating, especially if there is a lull in the action.”

Another challenge Urist faces is grooming. His religion prohibits him from using a razor to shave his beard, temples, and around his head. He maintains his grooming using a trimmer, but using a trimmer set at zero in those areas is not permitted. He also wears a yarmulke in the same print as his uniform under his patrol cap.

Urist is a Green to Gold Cadet at Baruch College under City University of New York. He enlisted in May of 2013 as a specialist to financially support his growing family. He decided to go Green to Gold to further his education. He is pursuing a Master’s Degree. 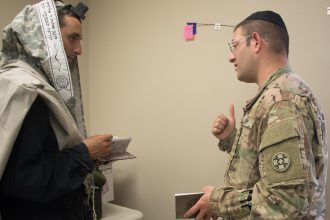 “I knew [maintaining my religion] was going to be difficult, but I didn’t know the specifics,” Urist answered when asked what he expected when he enlisted. “I kind of learned by trial and error. But I got a lot better at being politically correct and asking for things politely and knowing my rights.”

“If a unit is not being helpful, I will utilize a chaplain,” said Urist. “With their resources, they can help me.”

During his time at Advanced Camp, Chaplain (Maj.) Daniel Goldman has helped by providing him with services and resource, ensuring his right to exercise his religion was respected. 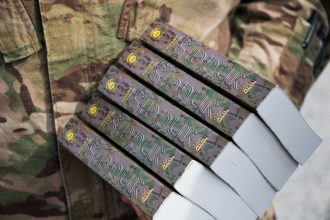 Psalm 92 is Urist’s go-to verse to keep him motivated.  It reads:

“It is good to praise the Lord and to say your name O Most High, to proclaim your kindness in the morning and your faithfulness in the night.”

“Daytime is light, when everything is visible and everything is going great so it is easy to praise God,” Urist elaborated. “But also at night, your faith; nighttime is a time of darkness, when things are uncertain or cloudy. That is when you have faith.” 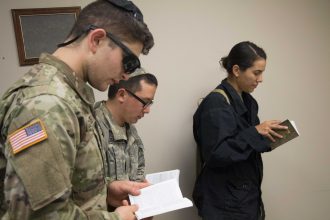 Urist’s commitment to his religion has inspired other Cadets to attend his services with him. Cadet Brianna Reece from the University of Hawaii at Manoa noticed that he carries about 20 more pounds than the average cadet in his ruck and decided to attend a field service with him, along with two other Jewish cadets: Oren Abusch-Magder from Tufts University and Ean Amberger from American University.

At the conclusion of the field service, Cadet Abusch-Madger said, “It’s good to have some Judaism after so much time in the field.”

While on the surface, it seems impossible to comply with the Army standards, chaplains ensure that Soldiers and Cadets can exercise their rights that they are fighting to protect when overseas. Being an Army of one does not mean Soldiers have to sacrifice their individuality.

Walk Before You Can Run