FORT KNOX, Ky. – As the last few notes of the Army Song play and yet another regiment says goodbye to their time at Fort Knox, one Cadet from 7thRegiment, Advanced Camp is already preparing for his next step as an ROTC Cadet. 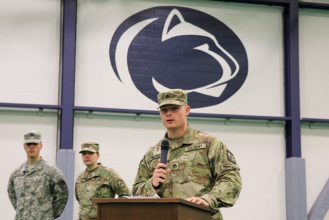 This coming fall, Tretter will serve as battalion commander for Penn State Army ROTC’s Nittany Lion Battalion. For the past 31 days, however, Tretter has been pushed outside of his comfort zone and has had to overcome the many obstacles that come with being an Advanced Camp Cadet.

Saturday, Tretter stood alongside 11 of his fellow Cadets, recognized for his outstanding accomplishments during his 31 days at Cadet Summer Training.

“Today I received the Golden Key Award,” said Tretter. “This award is given to the Cadet with the highest cumulative land navigation and marksmanship score in the regiment.”

Out of nearly 600 Cadets that have called 7th Regiment home, Tretter was acknowledged for his work in two of the nine must-pass events.

In addition to a written exam, land navigation’s practical exam tests Cadets on their ability to 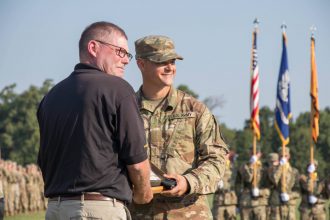 Recognized for his outstanding scores in both Land Navigation and Marksmanship, Cadet Paul Tretter received the Golden Key Award during Saturday’s graduation.

map and locate various points in the middle of the woods while overcoming difficult and unfamiliar terrain. Armed with only a map, coordinates, and a compass, land navigation has been deemed as one of the most difficult exercises here at Cadet Summer Training.

Cadet Paul Tretter was one of 11 Cadets recognized for his accomplishments during 7th Regiment’s graduation.

Alongside land navigation, Tretter also excelled in both shooting Alt-C and pop-up targets during the marksmanship portion of his training.

“Shooting Alt-C involves firing at paper targets at about 25 meters, whereas pop-up targets can range from 50 to 300 meters,” said Tretter.

“Pop-up targets were a bit more difficult because there’s no initial target for you to aim at, and at 300 meters, your target is pretty small.”

Tretter shot 38 out of the 40 possible points in Alt-C and an impressive 34 out of 40 points on the pop-up range.

When asked about his favorite part of Advanced Camp, Tretter reflected on his time in the field.

“I think my favorite part of CST was FTX II,” admitted Tretter. “I think being able to endure those days in the field and learning how to cope with the obstacles is very important.”

“I think the most important part is to be able to say we went through that, and as officers, we can’t expect our soldiers to go through something we’ve never or would never go through ourselves.”

As many of his fellow Cadets look forward to returning home and catching up on sleep, Tretter looks forward to reflecting on his time at camp and how he himself can improve as a leader.

“I’m going to go back and do a little after-action review of myself and see what I could have done better to prepare,” said Tretter. “I also want to focus on how we can help to prepare the coming MS3s for next summer.” 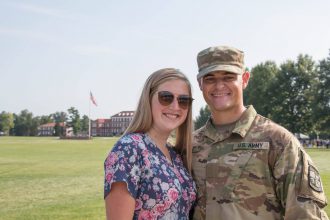 In the end, Tretter reflected positively on his experience at Fort Knox.

“I had a great time at camp,” said Tretter. “I had a really great time with my platoon and cadre – they were amazing! I couldn’t have asked for a better experience.”

As Paul and his loved ones prepared for their journey home, his girlfriend, Cassy, had this to say:

“Paul always makes me so proud and it’s an honor attending all of his ceremonies but particularly this one because I know how hard he worked all summer long.”

A Team of Strangers