FORT KNOX, Ky. – Silence. For the Cadets of 10th Regiment, Advanced Camp the most soul-piercing moment about their Field Training Exercise does not come from the chaos of enemy fire, but from the nothingness that inhabits the silence. 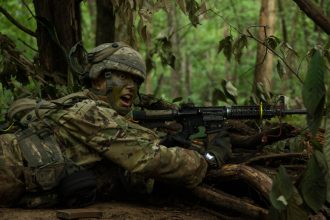 Waking up at the crack of dawn, the Cadets take their posts inside the Central Command Base, located deep in the Kentucky wilderness. They form a circular perimeter around the base and sit as the silence fills the calm, cool air. Thoughts begin to wander, drifting towards the coming storm – the inevitable attack from the Opposing Force troops.

With each passing moment the anticipation grows. The Cadets itch for the action to get underway. Yet, instead of the thunderous sounds of gunfire or the shouting of commands making its way down the line, the Cadets are meet with nothing but the trees rustling in the wind.

With dawn changing to morning, the Cadets still sit idly by; ready to jump into action at a moments notice. They look for any excuse to relive them of the haunting silence. Just when it seems as though that time would never come… 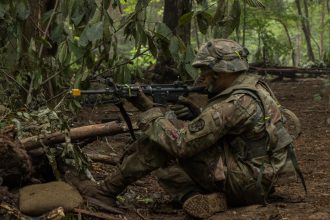 They are greeted with their first sign of madness; a smoke grenade fills the air with a deep cloud of purple.

“It was almost as if we had been teleported to a different world.” Said Cadet Tristan Howell of George Mason University. “We had been up since five and were waiting, what felt like, an eternity. But when the action started, we were ready.”

The silence had been broken; the Cadets had been freed from their curse. As they return fire, they move through the base and chaos with eagerness and chill nerves. Shell-casings fly left and right as the sound of M240 machine guns command the battlefield.

The enemy force attempt to make their way through the tree-line, but are halted by the Cadets. The two sides continue to exchange fire as the battle intensifies. Smoke fills the air, making it difficult for the Cadets to see more than a few feet in front of their faces. Just as quick as the chaos began, the battlefield finds itself once again in chilling silence. 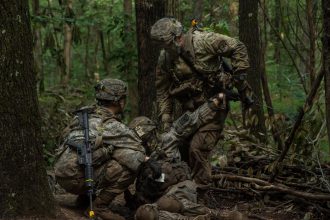 The order of a cease fire is passed along the line and the Cadets checked their ammunition and care for the wounded. They had won the morning, but still have a long day ahead. Yet again, the Cadets find themselves in the haunting state of nothingness and the chilling sound of silence.

“What’s done is done
There is still a sun.
Rebuild the shelter, invite all in.
maybe we’ll survive when the storm begins.”
– Herman Hoyte

Rappel tower and confidence course, one step at a time for Cadets

Got Leadership? An Experiment in the FLRC