FORT KNOX, Ky. – For the majority of Cadets that come through Fort Knox for Cadet Summer Training, both Basic and Advanced Camp serve as their first real look at what to expect as an Army Officer. For two cadets from 10th Regiment, Advanced Camp, however, the journey to commissioning has been seven, even 12 years in the making.

While the average age for a commissioned 2nd Lt. ranges between 21 and 23, these two Cadets are redefining what it means to be young commissioned officers.

“I’m fourth generation Army,” said Fossett, “so the military service is something that has always been in my furture.” 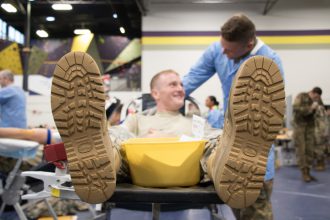 Initially, Fossett dreamed of attending the Naval Academy after graduating college, and spent the four years of his undergraduate degree at the University of Scranton preparing, both mentally and physically, for life as a Midshipman.

“I had my nomination and my candidacy ready,” said Fossett, “but my Army and Navy mentors advised me to go out and work for a while then get my second degree through ROTC.”

After taking time away to gain real work experience, Fossett returned to Shippensburg University to pursue a Master’s Degree and decided to follow the advice of his mentors and join ROTC.

Instead of following his initial Naval path, Fossett decided to make the switch to Army.

“I made the switch because what’s better than MREs and face paint?” joked Fossett. “In the end, I wanted to follow in my father’s footsteps into the greatest branch of the U.S. Military.”

Surrounded by Cadets six or seven years younger than him, Cadet Fossett has spent the past two summers overcoming both Basic and Advanced Camp, setting himself up to commission as an Army Officer.

“It’s been challenging but extremely rewarding,” admitted Fossett. “I would not be in a position to succeed without my Cadre and classmates here and especially those from Shippensburg.”

As Fossett prepares for his journey home, one of his fellow Cadets has been using his extensive military career to help provide perspective to the rest of his platoon.

“I’ve been in the Army for 12 years as a military police soldier,” said Cadet Jason Reese, George Mason University. “I’ve spent the last year two years before ROTC as a Drill Sgt. at Fort Leonard Wood, Missouri, where we did one station unit training for 19 weeks.” 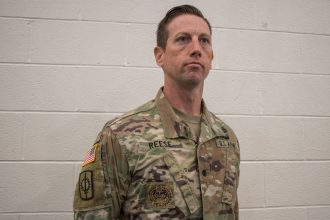 Cadet Jason Reese, George Mason University, brandishes the Drill Sgt. insignia along with the Cadet pip on his OCP. Photo by Emily Peacock

When asked about his transition from enlisted to ROTC, Reese took a moment to consider the past few months of his life.

“Going from a position of leading to once again following has definitely been a transition for me,” admitted Reese. “It’s been interesting having to learn how to communicate with younger people as peers as opposed to being their mentor.”

With his 12 years in the military, Reese has been using his experience to help advise his fellow Cadets throughout camp.

“You have to always start with the ‘why’,” explained Reese. “I wanted to help drive the ‘why,’ which kept cool heads while we were out in the field.”

With just a few days left until both Fossett and Reese cross Brooks field for 10th Regiment’s graduation ceremony, Reese thought about his motivation for becoming an Officer at 35.

“For me, it was about serving as a leader,” said Reese. “I’m trying to make the Army about family and about feeling a part of something.”

“Hopefully I’ll be able to make that change.”

“Learn to tap into that little bit of bravery.”

A Walk Through the Gas Chamber