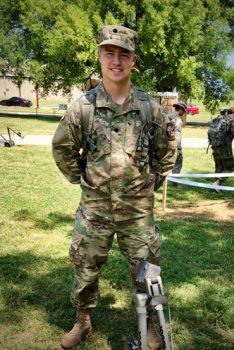 Cadet Crystal sets the bar higher for himself an his peers. Cadets within the battalion respond to his leadership because of his physical capabilities as well as his can-do-anything attitude. He has a positive attitude and comports himself as an officer. He consistently has the best grades in his MSL class, scores among the best on the APFT, and is heavily involved in extra-curricular activities such as CrossFit, Ranger Challenge, and the Queen’s Guard. Cadet Crystal remains humble and displays his desire to better not only himself, but his fellow Cadets as well.

I’ve wanted to serve our great nation in the armed forces since I was 12. I enlisted in 2105 and contracted shortly after. My number one concern is the welfare of my fellow soldiers. I live and serve by the motto: ‘for those who won’t.’ It reminds me to answer the call everyday with: ‘I will.’ For me, serving in the military and chasing excellence is about sacrificing myself for others to benefit. When I do that, we all benefit.

ROTC and Other Achievements and Awards: