Fort Knox, Ky.–The Cadre participated in an event called Alternate Course of Fire (ALT-C) at Schroeder shooting range. In this event they practiced on a Known Distance Range, a range that allows the participants to shoot at 100, 200 and 300 meters to test their lethality and grouping. 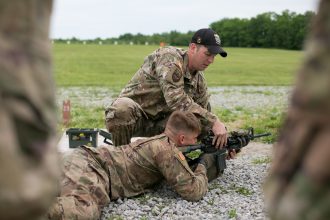 Cadre from Task Force Lethal train for the Alt-C qualiification course at Shroeder Range in Fort Knox, Ky. May 21, 2019. Cadre must complete the training before being able to teach the lane for Cadets.

First Lieutenant Adrian Bogart, one of the trainers on site, and a member of Task Force Lethal, said, “Individuals here will be training Cadets or overseeing the ranges that train Cadets,” He explained that this training happens every year to allow the Cadets to receive the most reliable information available.

“Training the trainers is an essential first step in any training exercise. This ensures that your leaders and instructors know exactly what they are talking about and are current with any and all procedures,” said Bogart. “It’s a most important first step to make sure everyone is on the same page and comfortable.”

This training is a one-week course that the Cadre find beneficial. Private First Class Braydon Duryea, another trainer, said that this is an efficient way to learn because, “We are creating a good baseline to teach upon.”

“We learned from AMU guys, who have 10-12 years of operational experience and have been shooting this way for years,” said Duryea. He said it’s important to learn from guys like that so he can relay their message to the Cadets even though he’s “only been shooting like this for a week.”

Sergeant Christopher Strunk, a Cadre member, also contributed to why this training is so crucial. He explained that everyone is reliant on each other. He said that even if he is just on the ammo detail, that if he is called upon, he can be able to come out to the range and teach Cadets effectively.

Throughout the training some of the Cadre had advice for the incoming Cadets. They said to come in with an open mind and be ready to learn.

The Beast of Beaudoin

Mask on, Mask off