Cadets must be able to don their mask in nine seconds and put on all of their Joint Lightweight Integrated Suit Technology in eight minutes. Staff Sgt. Ricky Farmer, out of Vancouver, Washington, trained and tested Cadets from First Regiment, Charlie Company, Third Platoon.

Squad Leader, Natalie Rodgers of the Citadel, had broken the three-minute record that Farmer had seen. She put on all of her JLIST in a total of 2 minutes and 48 seconds. Rodgers was excited to go into the gas chamber with her fellow Cadets and for the smiles and laughs that will come with the experience.

“It’s going to be a challenge, but I’m excited because it’s a real good morale boosting, team building kind of thing,” mentioned Rodgers. “It’s going to be something that everybody can think back to when we’re in the field in a couple weeks, and it is really hard times in the rain. We can be like ‘oh at least we’re not in the gas chamber.’”

While Rodgers was excited, there were people that were uneasy of the mission ahead. Jack Kamerer of the University of South Alabama, was anxious about the gas chamber but remained calm as he thought back to the advice he had heard from other Cadets. 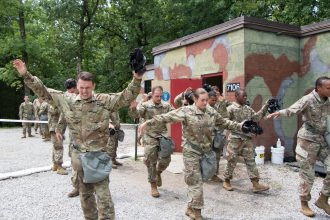 “I’ve talked to a couple people and they’ve said that’s one of the worst things you can do [think and stress about going in]. It makes it worse for you, so just kind of embrace it, and take it and you’ll get out and won’t have sinuses anymore,” said Kamerer.

He flapped his arms as he ran out of the chamber like Cadre had instructed. Kamerer realized it was not that bad and he actually did not know what to expect. When inside of the chamber the Cadets were first ordered to just break the seal of their mask. He could feel the gas sting his skin as it clouded the room, but was still confident that he was okay. He thought he was one of the few that were immune. 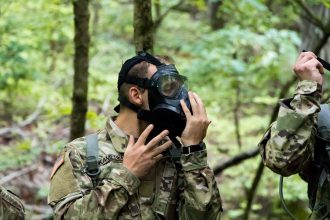 Kamerer chuckled, “as I was thinking I was doing fine… terrible! It hit me all at once. I started burning really bad. My nose was on fire, basically I started trying to breathe through my mouth because my nose was on fire. I was accepting that was not going to be the method of breathing any longer, that was a mistake absolutely.”

Wrapping up the interview he expressed the worst part of the whole experience, that there was no quick relief to the burning sensation he felt. “Even though you think it was only a few seconds, somewhere in my mind I thought we could just leave and that’s not how it was. But it ended up being not too bad,” revealed Kamerer.