Six continuous miles, 35 extra pounds on their back and layer upon layer of gear.

To any person in the general public, this just sounds like a hiking trip that some crazy nature-lover might take. To the Cadets, though, this is their first ruck march of the summer: the six-mile. 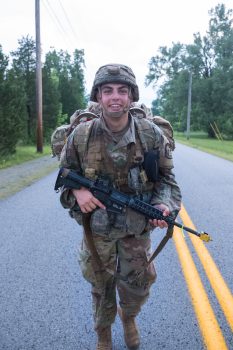 Throughout their time at camp, Cadets will undergo a six-mile, eight-mile and twelve-mile ruck march. The six-mile is the only must-pass ruck, in which cadets have two hours to complete the ruck or they will not be able to continue at camp. The other two rucks are purely based on completion and have no time component.

Cadets who complete the six-mile ruck march in 90 minutes or less are still in the running for RECONDO, an award given to those Cadets who exhibit superior skills in various advanced camp events.

Each camp event works to instill different vital values and characteristics within the Cadets. Some are rooted in trust while others find their base in resiliency. Ruck marches are no different. 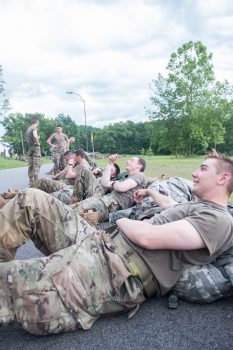 Sklar says the most important thing the Cadets can take away from this event is discipline. There are so many little things they can overlook, Sklar says that having the self-discipline to recognize those little tasks like drinking water and keeping their head up is a success all its own.

Each Cadet had their own way of keeping their head up. Many worked to encourage each other, helping their platoon closer to the finish line.

Cadet Sarah Madura, from Illinois State University and part of the 4th Platoon, Bravo Co. in the 1st Regiment, says she and her peers resorted to singing to keep their spirits up.

“I complain in my head, but I was with my battle [battle buddy] today and we were singing country music, trying to get through it,” Madura said. “So, I’d start singing and she’d chime in.”

Some Cadets resorted to songs from “SpongeBob SquarePants” rather than country music, singing a chorus of “The Krusty Krab Pizza” every now and again. 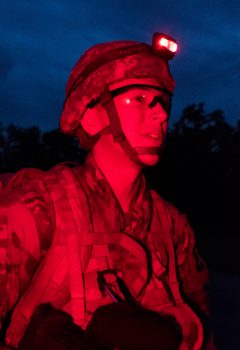 Cadet Rashaan Bean, from Dumfries, Virginia and attending Shippensburg University, Pennsylvania, is in the same platoon as Madura. Bean, who’s rucked several times before, was happy with his ruck results.

“I was feeling good about the ruck,” said Bean. “I was just focused on the faster I walk, the quicker I get done.”

Bean, who went to Basic Camp last summer, has previously completed a twelve-mile ruck with his university’s program. It was a very similar experience, he said. They carried their weapons with them and had an added 45 pounds on their backs.

“It wasn’t too bad. My feet are a little sore, my heels hurt a little bit, but overall, it’s not too much,” Bean said.

The six-mile ruck march is just the beginning of 37 days of long, physically tasking work for the Cadets. 1st Regiment Cadre were all proud to say that all of their Cadets passed with flying colors.