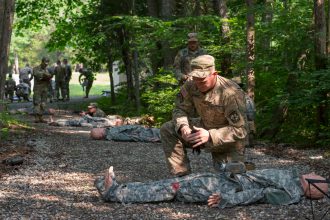 FORT KNOX, Ky. — Randy has been shot and the Cadets have one chance to save him.

The training focused on evaluating a casualty, going through the proper steps of treating the mannequin, Rescue Randy, and transporting him to a location where he can receive more in-depth treatment.

Maj. Joshua Conroy of the 3rd Bn., 414th Inf. Regt., was one of the Army Reservists from the Joint Base Lewis-McChord in Washington who oversaw the training. 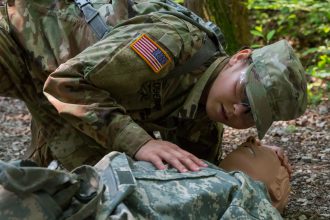 “There are several reasons why this specific training is so important. One, it’s a basic skill that every uniform personnel is required to know,” Conroy said. “It’s just part of the job and its knowledge that is essential for those who go into combat.”

Due to the essential nature of this training the Cadets must receive a “GO” on all the tasks associated with casualty care.

“And it’s go or no go because if you get a no go, it’s not meant to criticize anyone, it’s meant to let us know that you probably need more time on this,” Conroy said. “We make sure that everybody gets it, and that you leave here confident that they can complete these tasks in the correct order and possibly save someone’s life. That’s the paramount reason why this is so important.”

And the Cadets understood why this was so important for their futures as officers.

Cadet Sarah Christensen of Ashland, Massachusetts, was able to complete this training on her first go when she was evaluated.

“I think this is important today, because like they [the Cadre] said earlier, 93% of soldier lives are saved out in the field are done by the care the other soldiers are giving them, or that they are doing to themselves,” the Cadet from the University of Maine said. “Sometimes there are situations like these when you can’t get immediate medical care, and these are basic things that are really easy to do and are really important to saving lives.”

Another Cadet, Jessica Hindman of Mansfield, Massachusetts, who came to Fort Knox, Kentucky, from Norwich University agreed with this sentiment.

“As a second lieutenant, or even as a cadet, we may be called to save someone’s life one day,” Hindman said. “And we don’t know when that is going to be so if we train on it, and train on it often, we will be more prepared to do that.”

While other Cadets were able to find more use out of this training than just the intended use in the Army.

“This training is really important in any application, whether you are an active component, in the reserve component or even if you are a civilian,” Smith said. “I believe this should be some training that people should get in the world that we live in today. Because in any place, in any part of the world someone can be injured and you could have the potential to save their life prior to first responders getting there.”

And others found that confidence was definitely the name of the game.

John Owens, hailing from Bakersfield, California had some advice for those who would be new to first aid and this exercise.